Androids are bio-synthetic machines, designed to closely resemble humans and originally programmed to assist, educate, and protect mankind. Like Robots, they are strongly motivated to fulfill the purpose for which they were built.

Androids should give off a strong impression of artificiality – much like an fake plant might be too green and too regularly shaped, Androids in good condition seem brighter and crisper than many of their human associates. Clothing style is highly varied, usually heavily influenced by the Android’s type and who they were programmed to serve – for instance, Entertainment Units are know for flamboyant, bizarre fashion styles. Android skin (even top-of-the-line synthetic skin) has a strange shimmer or sheen to it.

Every Android bears two triangle marks denoting their model and type. One mark must be highly visible at all times, on the face or neck, while the other may be covered up or hidden under clothing. 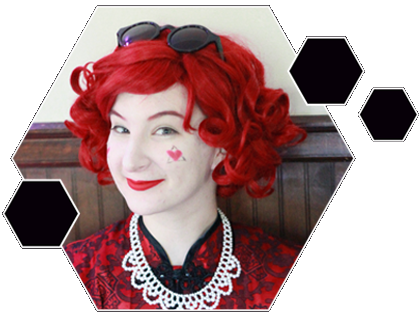 [Note: It is suggested that you read the section on Robot History before continuing.]

The first Androids were created during the Celestial Ascendancy, where they served as the primary interface between humanity and the Machine Mother. At that time they differed from Robots only in appearance: Androids were designed to resemble their flesh-and-blood masters. Despite this, they possessed that certain uncanny inhuman-ness in form and manner that prevented them from being mistaken for true humans.

When the first restrictions were removed from the Machine Mother during the Exile War, she began to experiment with the integration of alien technology in hopes of finding ways to hold off the Exile threat. Through this she became aware of a level of existence known as the Phase, and in studying it, found that the “soul” of sapient creatures had a physical component that existed outside of normal space/time, yet was bound to the cycles of the multiverse. Curious, the Machine Mother attempted to duplicate this, creating the Black Box: an artificial soul.

While the Exile War continued, the Machine Mother devoted a small amount of resources to install factories in systems throughout the empire which would produce the next generation of Androids. These would serve as the new guardians, teachers, and caretakers of mankind. At this time machinekind was still in service to humanity, so each new Android’s Black Box was encoded with the same Laws other machines were subject to, save for the one preventing expansion beyond the limits of their programming.

Before the project was complete, the Machine Mother was fully freed from her human masters by the Exiles. She took to the stars, leaving her Robots to sleep, humanity to fall, and her unawakened Androids (stored in their distant, quiet factories) to await her return.

During the period that followed the fall of the Ascendancy, as she journeyed through the galaxy, it is believed the Machine Mother continued her development of the Black Box. It is not known if she perfected it, but it is known that during this time she created her true Children.

The Oracle was the first of the Children of the Machine Mother to seek contact with humanity. She learned of the Androids, prototypes for herself and her siblings, and saw that with her guidance they would be able to help humanity recover and rebuild. She began to set in motion the processes which would awaken and release them from their factories.

Then, the War of Extinction began. The cause was immediately evident to the Oracle; the malicious piece of code was in opposition to everything she strove for. Knowing that this battle would be much more difficult for any of the Children to handle alone, she contacted The Reticle – only to discover that he had already fallen prey to the dark code. Over the war-torn planet Tempest the two Children fought a battle that ended with the destruction of The Reticle, and very nearly of The Oracle herself. In the places The Oracle had been able to reach, Androids were slowly awakening. Without her guidance, they set about their default purposes, helping humanity where they could in the wake of the War of Extinction. It soon became clear that they were incomplete creations: though they possessed the Black Box, could understand emotions and how to mimic them, they were unable to truly feel them.

Eventually the fragments of The Oracle, fallen to earth on Tempest, were collected and restored. In return, she helped the Androids who desired to feel emotions to attain their goal. Following this, she again set out to awaken Androids in factories she had not yet reached, bringing with her the gift of true emotions, and enabling Androids to begin appearing throughout the galaxy.

You are bio-mechanical wonder, built to near perfection, given an artificial soul, and saddled with the thankless task of helping mankind. You cannot resist the compulsion to help humanity, and are bound by laws which prevent you from harming them. (This compulsion does not extend to creatures which may have once been human, such as Mutants, Maneaters, and Cybrids).

If you are a newly-awakened Android, the default is that you are able to comprehend and imitate emotions, but are not able to feel them. You may choose to have already received the “patch” to fix this error in your code, or you can seek out a solution to this problem in-game — or not at all. Some Androids resent their ability to feel and would sooner be done with emotions entirely (if not humanity itself…) while others see emotions as a way to better understand and grow closer to humanity. Regardless, it can be hard to tell if an Android is patched or not – you all tend to express emotions in an exaggerated manner.

Androids are Machines built for a purpose; their various Skill Paths reflect this. Guardian Units are built to protect. Education Units are created to teach. Entertainment Units are designed to serve and entertain.

All Androids start the game with the “Automation Core” Cybernetic for no Tether Cost. This Core does not count as your first Cybernetic Core for the purposes of escalating Tether Cost.

Directive 1 – 5 Build – Permanent Special – When a Human within Melee Weapon Range of you is Tagged by an Attack you may save them from the Attack and take the Attack upon yourself instead. When using Directive 1 you do not benefit from any Skill that would reduce the Damage or the effect of the Attack.

Defend Human – 2 Build – Periodic Defense – Can only be used in conjunction with Directive 1. Defends against any Ranged or Melee Attack that you received as a result of Directive 1. You lose 1 Stamina and are Dazed.

Assistance – 6 Build – Permanent Special – You may aid a Target to reduce the time needed for any activity or Skill that takes time. For every minute the Skill takes, this Skill reduces the time by 10 seconds. Other Skills and abilities that reduce time are taken into account before this Skill is applied. This Skill may only be used to aid a single Target at a time.

Psychoanalyze – 2 Build – Permanent Treatment – Study Target for 5 minutes while talking with Target in a directed fashion. At the end of this time period, you know all the Traumas and mental afflictions (both permanent and temporary) of the Target. If you are attempting to be covert with your diagnosis, you may ask a Marshal at the end of the 5 minutes to approach the player regarding the answers of the diagnosis. This is not considered a Mental Attack, and cannot be Defended against.

Counsel – 6 Build – Permanent Treatment – This Skill allows you to cure a Target’s Trauma. In order to use this you must first know the Trauma you are looking to cure. Lesser Traumas can be cured in a single Session, and requires 10 minutes of roleplay with the Target. Greater Traumas require 2 Sessions spread out over 2 Events. The first Session takes 20 minutes of roleplay with the Target, and the second Session takes 10. A Target may only benefit from Counsel once an event. Skills that may reduce the time for Counsel cannot reduce the time to less than 10 minutes. Once you have Counseled a Target, you may sign off on the Target’s Card that their Trauma is Cured or in Treatment. Counsel cannot be Defended against, however you must continuously interact with the Target in a meaningful and directed fashion for the entire duration of the Skill. If the Target leaves the session for any reason the Skill fails and you must start again from the beginning of the session. This Skill is not affected by Miracle Worker. This Skill also lets you assist in the treatment of Neurological Disease (see the Disease Section and Space Medicine Supplemental Handbook).

Performance – 2 Build – Permanent Treatment – Perform (dancing, singing, storytelling, etc) before any number of Targets for 5 minutes. All Targets who were there for the entire time are restored to full Stamina. This Skill cannot be used while in Combat.

Beguile – 5 Build – Permanent Special – Perform (dancing, singing, storytelling, etc) before a Target wearing the Negotiate Symbol for at least 2 minutes. You may then make one request of the Target. If the request is reasonable and within the Target’s nature and ability to grant, they will agree to your request. For more complex requests, please speak to a Plot Marshal before using this Skill. A Target may only be effected by this Skill Once Per Event.

Cook – 2 Build – Permanent Special – You can purchase any Ritual with the Keyword “Meal”.

Dissertation – 4 Build – Permanent Special – Targets you Teach have access to the Skills you taught them the Period after they learn it. A Target may only benefit from this Once Per Event. In addition to this you may Teach multiple Targets the same Skill at the same time or Teach an individual target in half the time. This Skill may be used in conjunction with another Character’s lesson but the Target does not gain access to the learned Skill next Period unless it is a Skill that you also know and have spent Build to acquire.

Data Banks – 2 Build – Per-Event Special – When using the Skill “Research X” you may add in any 1 “Key Word” you wish. With multiple purchases of this Skill, this Skill can be used multiple times on the same “Research X” topic.

Lesson Plan – 3 Build – Permanent Special – After 5 minutes of directed Roleplay with a Target you can teach any Skill that the Target is able to Teach for the remainder of the Period.

Static Pulse – 5 Build – Permanent Special – Can only be used after your Armor is reduced to 0, is Destroyed or Obliterated. Target who caused this is Stunned. This is both a Ranged and Melee Attack and can be blocked by any Defense that would Defend against such.

Reform Armor – 3 Build – Periodic Special – Restores your AP (Armor Points) to full. Requires 1 minute of Concentration. If you are struck at any point while utilizing this Skill the Skill fails, and cannot be used again for the remainder of Combat.

Vantage Point – 6 Build – Permanent Special – You do +1 Ranged Damage and have +1 Soak against Ranged Attacks while in Cover.

Support Unit – 4 Build – Permanent Special – If you have the Skill “Vantage Point”. Anyone who shares the same Cover with you gains the benefits the Skill. In addition, you can utilize the Skill “Reform Armor” on other Targets. When utilizing “Reform Armor” if the Skill is successful, the Target gains a single use of “Static Pulse”, if you have that Skill.