The Yana are an aquatic humanoid species, best known as one of the strongest mercenary groups in the galaxy. Their species is notable for its extreme sexual dimorphism: Yana females are fully amphibious, having a dense bone structure and hardy composition, while Yana males are delicate, incapable of surviving outside water without a breathing apparatus.

All Yana must wear prosthetic ears (in the “Sea Elf” style). They have intricate facial tattoos, often covering their entire face. For female Yana, these tattoos commemorate great victories in battle. Male Yana also bear tattoos, but in their case these serve as a record of their genetic heritage. Yana female dress is a mix of tribal/militaristic/futuristic elements, chosen more for utility than for fashion, and mostly made from materials that are easy to repair and readily available on their aquatic homeworlds.

Male Yana wear brighter colors and lighter, flowing garments, often made from foreign materials. Since male Yana are not amphibious like their female counterparts, gills should be represented on their necks, and they must wear a device that will allow them to breathe outside of the water. In general, all Yana appreciate ornamentation, and will decorate themselves with a variety of decorative baubles and jewelry. 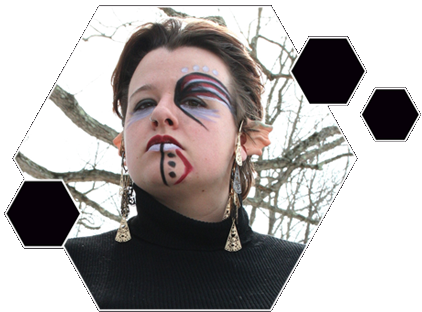 The Yana were an iron age civilization when the Ithgish came to their world. The peaceful Ithgish saw the potential of the Yana, and knew that with help they could be converted to a force of considerable might, capable of defending their now-mutual borders. Within a generation the Yana were able to begin traveling the stars.

This arrangement held for nearly 30,000 years. After the Ithgish went into seclusion, the Yana, whose society had developed around the mercenary lifestyle, continued to sell their services. The Yana entered their own period of seclusion around the time the Celestial Ascendancy was formed. Because of this, they were not around when the Ithgish returned, and were not aware of their benefactors’ extermination at the hands of the Celestial Ascendancy until centuries after the fact.

The Yana first came into contact with the Ascendancy when the empire sent an invasion fleet into their home system. The Yana, still in isolation at that time, crushed the invading force so thoroughly that from there on the empire chose to pursue a policy of containment, rather than risk direct conflict with them again.

The Yana were just beginning to emerge from isolation a century ago when a disaster known as the Desolation swept through the Yana homeworld of Yaraved. Eighty percent of the population was wiped out, and a substantial portion of the remaining male population was rendered infertile. The surviving Yana were forced to flee their now-uninhabitable home, and find their fortune among the stars.

Abroad, The Yana slipped back into their mercenary ways, becoming known as the premier mercenary force in the galaxy. They used the funds acquired from this work to keep their civilization alive. Now and again they would discover a planet that suited their unique biological requirements, but it seemed as though ill fate were following the Yana: some disaster or conflict would inevitably place any suitable planet out of their reach. Following a limited engagement with the Boz, the Yana claimed a planet in their system as payment for services rendered, and have maintained a growing colony there. Time will tell if this becomes their new homeworld.

Yana sexual dimorphism is quite extreme and has had a heavy influence on their social structure. Female Yana are dominant, comprising the primary workforce, their strong bone structure and amphibious natures making them more adaptable to life outside of the water. Male Yana are aquatic, having gills which prevent them from being able to live outside of the water for longer than one hour without some kind of breathing aid. Even thus enabled, their fragile bones make existence on land quite uncomfortable. Yana biology requires them to breed in swamps and marshes.

Though a mercenary civilization, the Yana can be particular when it comes to taking contracts (or making them; the Yana are keen on legal matters, and every Yana child is raised to have the equivalent of a law degree). They will never knowingly work for any Entropic force, and while they do no tend to involve themselves in wars for which they are not paid, they will make occasional exceptions for situations which involve the forces of Entropy. Senoma, or worship of the Nameless, is the state religion of the Yana.

Your life is very different depending on if you were born as a male or female Yana. If you are a female, you have been trained in the arts of war and law from the time you were first able to walk on dry land. If you are a male, you have lived a protected life, primarily in the water (as you cannot survive outside it without your breathing apparatus), making use of your time for leisure and scholarly pursuits.

Your culture is obsessed with matters of honor and propriety; you always make certain you are “doing things the right way.” You never break a contract, even if it works against you, however, you will, if necessary, go more by the letter of the law rather than the spirit of the law, and will use you exceptional legal knowledge to find loopholes whenever possible. You find comfort in swamps, marshes, and oceans that remind you of your lost homeworld.

Same-sex bonds between Yana are common, though most of these relationships are best described as aromantic. Perhaps owing to their physiology, Yana never form bonds with their mates. The female lays her eggs in a swamp, and the male fertilizes the eggs. Yana mating does not require partners to see one another, and tends to be done as something akin to a business arrangement.

Female Yana treat males of other species as second class citizens – a habit which can and does often lead to diplomatic issues. The cultural influence is so strong that the Yana have difficulty in dealing with species with more than 2 genders. Because of this, Yana often employ intermediaries in situations which may require talks with any non-female of another species.

Yana names tend to use long vowels towards the front and often contain mid-name apostrophes.

All Yana have a strong understanding of the law, this is apparent in their General Skills as well as their three paths. The Mercenary Division is only available to female Yana, and provides a smattering of martial Skills as well as Skills related to codes of conduct. This is the best choice for those who want to play fighters. The Tender Division is available only to male Yana. These Skills are focused on providing benefits to others. Take this if you want to play support. The Ministry Division is available to all, and is focused heavily on law and administration. Take this if you want to be involved with the social and political aspects of the gameworld.

Yana have an adaptive lung system and can breathe underwater. As this is unlikely to come up too often, they Yana also have a layer of non-Newtonian fluid just beneath their skin that absorbs sudden impacts. For the first Melee or Ranged Attack against them during each Combat or to initiate a Combat, they can call “Shock Layer” to Defend agains the Attack. This applies to the very first Attack only.

Tattoo Artist – 6 Build – Per-Event Special – You can apply Tattoos to the face of a Willing Target after any great accomplishment (as judged by a Plot Marshal). These Tattoos count as a Greater Flaw. So long as the Target has this Tattoo on they gain a 1 Influence Discount on any Scheme directly involving the Yana. Non-Yana can have a limit of 1 of these Tattoos. Yana can have up to 3 of these Tattoos. You cannot Target yourself with this Skill. You may not pick the same Target more than once every 3 Months, nor may other Yana pick that Target within that window.

Legal Contract – 3 Build – Per-Event Special – Allows you to draft a Legally Binding Contract between two willing parties who are not under duress. This contract can be of any length up to 6 Months. The terms of this contract are binding, and neither party can violate the explicit words used to draft the agreement. At any time after the first month of the Contact, either parties may seek arbitration to change the wording of the Contract. If the other party is unwilling to enter into arbitration within 1 month of the request, the Contract is considered null.

Collect Trophy – 4 Build – Permanent Special – Spend 1 Minute roleplay over a Dead Target. You Regain 1 Stamina. This can only be Once Per Target.

Challenge – 4 Build – Per-Event Special – Spend 1 minute dictating the terms of a Challenge to a Friendly non-NPC Target. Both you and the Target must take part in the Challenge though others may be involved. Whichever Targets wins the Challenge gains 1 Influence which must be used that Event. The Challenge must be honest, and declared against someone you consider to be a valid opponent. This Challenge may be of any variety.

Elite – 4 Build – Permanent Special – When you take this Skill you must choose a Mercenary Group/Faction. You have +1 Influence with that Faction. In addition, all Missions you take with or directly connected to that faction grant you a 20% Bonus (rounded up). Curios count as 50 Components for the sake of this Bonus.

Mission Focus – 4 Build – Per-Event Special – Defends against any Attack. This Defense can only be used while you are explicitly involved with a Mercenary Contract.

Dense Bone Structure – 8 Build – Permanent Special – Whenever one of your Limbs is hit by a Skill that would Destroy that Limb, instead of it being Destroyed, it is merely not functional for 1 Minute.

Performance – 3 Build – Permanent Treatment – Perform (dancing, singing, storytelling, etc) before any number of Targets for 5 minutes. All Targets are restored to full Stamina. This Skill cannot be used in battle.

Xenobiology X – 5 Build – Permanent Treatment – When purchasing this Skill you must choose a specific Race/Species (Terrans not Humans). This Skill can be purchased multiple times, as per Periodic Skills cost goes up by 1 per purchase. Spend 5 Minutes Treating Critical Target. Target is restored to 1 Body, and is dropped to 1 Stamina. Target cannot benefit from this Skill more than Once Per Event.

Rival X – 5 Build – Permanent Special – When purchasing this Skill choose a Faction. You can never do Schemes for that Faction. You gain 3 Influence Per Event to use explicitly on Schemes against that Faction. This Skill may not be unlearned, however if your Rival Faction has not been seen for 6 Events, or has been removed from the game, you may speak to a Plot Marshal about selecting a new Rival.

Shiv Entropic – 4 Build – Per-Event Surprise Small Weapon Attack – Tag Target Entropic Creature in the Back. Target immediately falls to the Out stage of their Death Count.

Addendum – 5 Build – Permanent Special – When utilizing the Skill “Legal Contract” or when you are part of writing any Legal Document, you may add a single line to that Document after it has been signed. This line cannot undo the terms of the Contract or Document. In addition to this, when using the Skill “Research X” you gain the following question that may be asked in addition to any other questions, so long as the topic of “Research X” has to do with a Faction, the Law, or Culture; “Are there any loopholes?”. This question can be restated in such a way that it is appropriate to the topic at hand. Addendum can be used in conjunction with the Skill “Challenge” to add a last minute item to the contest. In this case, it is considered an Attack and may be blocked via any Mental Defense.