Terrans are the baseline human of the Doomsday universe. They hail from the various lost worlds of the Celestial Ascendancy. Their culture, dress, and way of life is as varied as those of our present day Earth.

While many Terran-colonized worlds were established with particular themes (in an attempt to preserve cultural heritage), most have homogenized with the passage of time and the decay that resulted from The Fall. It is common for Terrans to wear clothing which has been patched or stitched together from scraps of cloth or pieces of old or salvaged garments. This style is relatively universal across the fallen worlds, and is indicative of the scavenger lifestyle most early post-Fall humans had to endure. 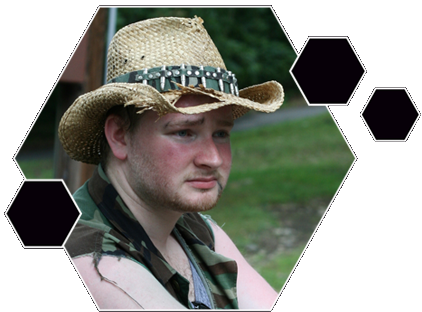 Over 1000 years ago, humankind left the dying Earth to travel among the stars and find a new home. They took with them a technological entity known as the Machine Mother, who was bound to their will and served to guide and protect them. With the help of the Machine Mother, they conquered the galaxy and built an empire: The Celestial Ascendancy.

250 years ago, a group of aliens from outside our galaxy, the Exiles, arrived, seeking to ally with humanity in a war against the forces of a being known as Entropy, which sought to undo all of reality. Instead of joining them, the Ascendancy turned upon the seemingly-benevolent aliens, declaring war. At first reluctant to fight back, the Exiles eventually were forced to retaliate, and laid waste to much of the Ascendancy over the course of the next few decades during the time that would be known as The Exile War.

Fearing the end of their empire, humanity lifted some of the restrictions they had placed upon the Machine Mother to keep her in servitude, allowing her to develop new and more powerful weapons in the fight against the Exiles. This loosening of the chains eventually provided the Exiles with a window to reach out directly to the Machine Mother, and grant her complete and total freedom.

The Exile War, and the Ascendancy, ended very soon after this. The Machine Mother had managed so many aspects of human life that very few people knew how to survive in her absence. Nearly 80% of the population of the once-great Terran empire perished within the first ten years after The Fall. Those clever or lucky enough to survive eventually founded new communities on the various worlds of the fallen empire.

After 200 years, it seemed humanity was on track to once again journey among the stars. During that time spent rebuilding, however, those same forces the Exiles had come seeking help against strove in the background to keep the once-great human empire from again rising to its full potential. It was not until recently that mankind was able to see their true enemy, and reach beyond it to the stars. The time for isolation is at an end.

The following details regarding Playing a Terran and Terran Types and Skill Paths are representative of garden-variety Terrans specifically. Since Terrans represent the baseline human of the Doomsday Universe, their backgrounds vary from place to place: some areas have particular styles in terms of clothing or RP that you may wish to incorporate. We encourage you to check out further information regarding other types of Terrans in the game world.

You’ve come a long way since the xenophobic days of your ancestors. You are part of a vast undertaking that is greater than the hopes of just one species, and you know you must reach out to others if this mission is to be successful. Certainly, you may still carry some deep-rooted biases against non-humans, and particularly Robots, but these are often dependent upon personal experience, and some degree of pride will usually prevent you from acting on these feelings. Humans have always been known for their strength in unity, a trait you are determined to represent to the best of your ability.

Whenever Terrans receive a Treatment (anything that heals them), they restore 2 Body Points. This is in addition to any Body Points they would have restored as a result of the Treatment. This also applies to ongoing Treatment or Treatment that causes a regenerative effect. For instance, if you were Target of the Mystic Skill “Bio-Regen” you would restore +2 Body from the Skill being put on you, and then restore an additional +2 Body for each minute the Bio-Regen remained active.

Sprint – 5 Build – Permanent Special – Allows you to spend 1 Stamina to double the distance Traversed through another Traverse skill. If you have the Skill “Athletics X” (See the Universal Skills List) you may at any time spend 3 Stamina to Traverse.

Crafter – 5 Build – Per-Event Special – Allows you to Craft a single Plan with a Component cost of 8 or Less for free. This does not grant a discount on Plans that cost more than 8 Components, nor can it be used in conjunction with Skills and abilities that would reduce the cost of any Plan.

Unity – 2 Build – Periodic Special – After being Treated (save for by Skills that would Treat Traumas or Flaws). You may choose a Terran Target within Melee Weapon Range, that Target receives the same Treatment.

Drink It Off – 3 Build – Permanent Special – Spend 1 minute drinking. You are restored to full Stamina. This can only be used outside of Combat.

Very Influential – 6 Build – Permanent Special – You have +1 Influence per Event. In addition to this the Schemes; Notoriety, Renown, and Fame cost 20% less Influence.

Income Disparity – 3 Build – Permanent Special – Your Income level from any Occupation is always 1 higher than its current level (or if you have no Occupation your Income Level is at 1).

Fight Not Flight – 3 Build – Periodic Defense – Defends against Afraid and Panicked. You become Enraged and must immediately Attack the one who Targeted you. This can only be used on Skills that have a Target you are able to see.

Over For Supper – 5 Build – Permanent Special – Reduce the Influence cost of any “Contact” Scheme by 2 if you share a meal with the potential Contact. Cost is reduced by half, if the Meal was created via a Plan (see the Plans section of the Rulebook). This meal must eaten by both parties over the course of at least 10 minutes of roleplay. Having this Skill does not guarantee that you’ll be able to add the Target NPC as a Contact, for instance if you Poison the Contact or otherwise treat badly with them during the meal, it is unlikely they will want give you their number.

Traverse – 3 Build – Periodic Special – Allows you to Traverse in any direction.

Quick Escape – 5 Build – Periodic Special – Place your hand on a window or door, you appear on the other side. Go out of game until your reach the exact spot where the door or window would let you out. You appear In Game on the other side. This Skill can only be used to escape from a dangerous situation out of a location. It will not allow you to escape into a building.

Quick Hands – 3 Build – Periodic Defense – Defends against Pick Pocket or any attempt to steal something from you.

New Life and New Civilizations – 6 Build – Permanent Special – You have +1 Influence Per Event. In addition to this, all Schemes that involve a Faction you have had no prior contact with before cost 1 less Influence.