Humans of the Boz System are known for their self-sufficient, adventurous natures. They owe much to the resourcefulness of their ancestors, who were better-equipped to survive the fall of the Ascendancy than many Terrans. In recognition of this, many Boz retain with pride many cultural cues dating back to the founding of their post-Fall capital, based on old 20th-century London.

The Boz style of dress is characterized by a certain old-fashioned sensibility, heavily influenced by the fashions of late 19th and early 20th century earth. Materials used are of high quality, durable and elegantly efficient, meticulously well-maintained no matter what the social standing of its wearer might be. Most would, by looking at a Boz, be able to determine their profession and lifestyle.

Almost all Boz have at least one visible cybernetic, another hold-over from the early days of their colonies. Many of these cybernetics are out-of-date, antique or even purely ornamental, maintained with loving care by their bearers. The style of this equipment is best described as dieselpunk, but without the grunge and grit. 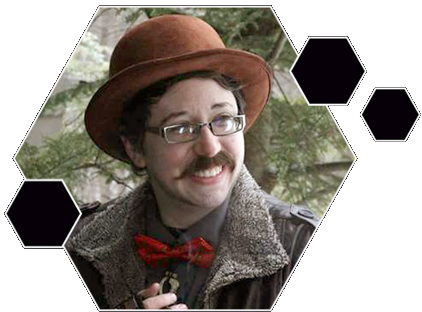 While The Fall of the Celestial Ascendancy brought chaos and disarray to most Terran-populated worlds, this was not the case for all of them. In the early days of the Ascendancy, the Boz System served as a mining colony and resort destination. The many resource-rich moons provided the much-needed raw materials for the early expansion of the empire, and the two inhabitable planets, home to strange and dangerous animals and megafauna, were adapted into themed wildlife preserves and hunting grounds, attracting visitors and trophy hunters from throughout the Empire.

As the Ascendancy moved toward the utilization of more exotic materials and non-virtual entertainment fell out of fashion, the Boz system lost its broader appeal. Many left the system, seeking work elsewhere. Those who remained tended to be of a type most dedicated to a more raw, physical existence.

The Boz way of life changed very little directly after The Fall. Already relatively self-sufficient, the Boz adapted and flourished under the same challenging conditions that caused other human populations to disintegrate. The low-tech city of Dinium (a re-creation of early 20th century London), required little when it came to conversion, and soon became the Boz’s de-facto capital and cultural center. Renewing their mining efforts, the Boz developed a new fleet of ships capable of travel to local systems, establishing a trade network which would expand in the years to follow.

Exploration in and around the Boz System kindled a spirit of adventure that persists within Boz culture to this day. These expeditions were not without significant risk, however – some Boz would say that is part of the appeal. One such expedition to the local asteroid field met with disaster when they discovered artifacts of the Void Empire. Tampering with these artifacts awoke creatures that had lain dormant for a million years, which massacred the explorers and the various groups that attempted rescue. Since then, even the boldest Boz explorers take special care to avoid certain areas of the asteroid field.

In 205NA, the Boz Trade Fleet encountered a seemingly derelict Aesir vessel. Those who boarded to attempt salvage found the ship still occupied. This was the first known encounter with the God Eaters, Aesir tainted by the entropic being known as the Wurm. Through this insidious power, the God Eaters overwhelmed the Boz Trade Fleet and infiltrated the Boz government. In 215NA, a Trade Fleet expedition was sent to the Bard System, where the Boz were freed from God Eater control. Since then, the Boz have made a point of training their people in defense against the machinations of the Wurm and its agents.

Due to fallout from their time under God Eater control, the Boz came into conflict with the Yana. A sort of cold war exists between the two groups, with the Yana claiming rights to a swamp world within the Boz System, and the Boz being unable to do much about it.

The Boz of the today are primarily a trading empire with ties to almost every friendly system in the quadrant. They have an adventurous spirit, and are well poised to and ready to handle any threats and challenges the galaxy might throw at them.

Unlike other Species/Races the Boz do not have an explicit “play style”. Here are a few suggestions:

You likely grew up on one of moons in the Boz system, which served as home to the majority of the system’s population. Your culture prizes entrepreneurship, exploration, and wealth. You have a strong drive to be as self-sufficient as possible, but this is tempered by a genuine desire to make life better for your fellow Boz in general. There are many programs that help lower class Boz get a leg up, and help them become the best Boz they can be.

You have an appreciation for the finer things in life, and will often pay more than you have to, or take unnecessary risks, to attain objects and experiences that are of value to you. You are good at keeping a cool head in times of crisis – events that would traumatize others often leave you (mostly) unfazed.

In keeping with the founding style of the system, many Boz names have an old-Earth, literary tone of eloquence to them, such as Reginald, Beatrix, Byron, Sebastian, Olivia. In spite of the complaints of Boz historians, it became trendy at some point to pull names from old records and books. It is not uncommon to find Boz with what were once last names, city or street names, product names or company titles as their first names (Derby, Stetson, Lorry, Winchester).

Boz Skill Paths reflect the various aspects of Boz Culture. Asteroid Miners have a very strong work ethic, and earn their living through labor. Adventurers follow their spirit into and, hopefully, out of danger. Venture Capitalists are focused on the accumulation of wealth and power… but mostly wealth.

The Boz are prepared for anything. At the beginning of each Event prior to Lay On, you may choose one of the Common Status Effects from the Game Terms section of the Rulebook (with the exception of Destroy and Obliterate). For the duration of the Event you may Defend against that Status effect by spending 1 Stamina. This does not Defend against other aspects of the Skill such as Damage, only the
Status Effect.

Higher Education – 5 Build – Permanent Special – When utilizing any Skill that has Keywords, you may always add 1 additional Keyword.

Cyber Chic – 3 Build – Permanent Special – You have a Discount of 1 for any Scheme involving the Boz so long as you have a Cybernetic installed.

Space-Lift Operator – 5 Build – Permanent Special – When using Carry, you can Carry up to 5
Targets and can move as fast as the slowest one of you is able to travel.

Bum’s Rush – 4 Build – Periodic Melee Attack – Tag Target. You Traverse with the Target in the direction of your choice, then Throw the Target.

Blast Zone – 6 Build – Periodic Special – Defends against any Area of Effect Attack. This Skill does not work on any Attack that would cause the Area you are in to stop existing. This Skill can be activated to provide 1 minute of Immunity from a persistent effect on an area (such as Blight or Radiation).

Breach – 8 Build – Permanent Special – Requires Marshal. This Skill allows you to create a hole in a wall through which you and whoever you choose may enter. Indicate the area you wish to put a hole. The Marshal will give you a time between 2 and 20 minutes. This is the time you must spend opening the hole. RP for opening the hole must be appropriately loud. Once a hole has been opened, only you may give access to its use, and my only grant access so long as you have a hand on the wall near where the hole is. This hole lasts so long as you remain within sight of the hole, and have the active ability to grant access to the hole. When passing through the hole, all Targets go Out of Game and appear on the other side of the wall directly on the other side of where the “hole” would be. Certain walls, such as energy barriers, cannot be Breached. This Skill is effected by anything that would reduce Crafting Time, but can never be reduced to less than 2 minutes.

Whip – 4 Build – Periodic Special – Allows you to carry a Phys Rep whip or similar object. Point at a Target within Traverse Distance. You may do one of the following; Move to that Target; Cause a non-Weapon item on that Target to end up in your hand; activate a Target remotely that could reasonably be triggered via a whip. If you have the Skill “Athletics” this grants you the Keyword “Climber”, and allows you to utilize this Skill to immediately Traverse to an area of higher elevation than your current location. In a building with more than one story, this would allow you to reach the second story.

Plot Armor – 8 Build – Per-Event Defense – Defends against any Attack or Event that would cause you to be Obliterated or Die instantly.

Breaking and Entering – 5 Build – Permanent Special – This Skill allows you to enter into a building or area through unusual means. Place your hand on a door or window you wish to enter through and count loudly and slowly down from 10. Spend 1 Stamina. You are now on the other side of that door or window. On its own this Skill only allows you to enter into areas that are not secured by any means. If a door or window are bolted or locked this Skill has no effect on its own. However you may use up to 2 Keywords in conjunction with this Skill, that may allow you to bypass such countermeasures. This Skill requires a Plot Marshal.

Comps Equal Power – 8 Build – Periodic Special – You may spend 20 Components to gain 1 Influence, this Influence must be spent in conjunction with this Skill being activated. Requires Marshal.

Comp-troller – 5 Build – Per-Event Special – You can activate this Skill instead of spending Components for any Skill that requires Components to be spent excluding Plans. This Skill can work to counter the loss of Comps from any type of Smuggling.

Diversified Portfolio – 6 Build – Permanent Special – You begin each Event with 6 Comps of your choice, each Comp must be of a different type.

Front of the Line – 6 Build – Permanent Special – You may hand anyone who is Treating you 3 Components. This reduces the time of any Treatment done on you by half (rounded up) for the next 5 minutes. You may also give any Willing Target 10 Components at any point during Combat. For the remainder of Combat all Treatment done on you by the Target has its time reduced by half (rounded up), but they are unable to Treat any other Target for the remainder of Combat.