Cybrids are sapient beings modified with cybernetics to such an extent that they can no longer be considered purely organic lifeforms. Those who voluntarily become Cybrids have effectively rejected their organic nature in order to become part of a greater technological collective.

The following Species can all become Cybrids: Humans (all types), Mutants, Zelnalak, Oniri, and Yana.

Cybrids are more machine than flesh. This is not a case of mere cybernetic implantation, but rather an extreme reworking to high degree, where removal of the implants would be impossible. Cybernetics should be extensive and highly visible, covering significant portions of your body, but it should still be clear that there is a part of you that is still flesh and blood. Stylistically these modifications can be of any compatible type, clean and streamlined, rough and messy, in shapes normal or abnormal for your character’s form. Every Cybrid should bear a visible hexagonal mark one temple, signifying their connection to their Hive.

If you are playing a Cybrid of a non-human species, you must costume for that species in addition to the Cybrid requirements. Clothing for Cybrids can be the same as what that species might usually wear. 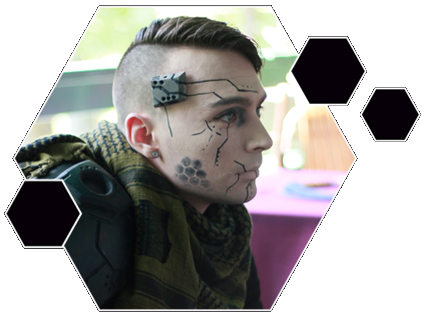 Cybrid history is difficult to pin down. The problem is a matter of definition. From a visual perspective, there is very little to differentiate a heavily modified humanoid from a Cybrid. Instead we must narrow our definition slightly, and say that a Cybrid is a sapient species, heavily modified by cybernetics, for the explicit purpose of connecting them to a group-mind network or to some external power. This definition remains somewhat broad, as such technologies have existed in a number of forms for millions (if not billions) of years, but it does allow us to address the subject with a bit more specificity.

Cybrids, in the modern sense, date back to the War of Extinction. Humans, as well as several other organic species, were captured and converted into technological entities for the express purpose of helping the Robots win the war. These Cybrids had little to no free will, their minds completely dominated by machine programming, and very few survived the war. Those who did survive went mad when their will was returned to them, having been aware throughout the entire experience of conversion and enslavement.

Over a decade ago, a machine entity known as The Reticle sought to regain his power by forcibly converting thousands of Terrans on the planet Tempest into Cybrids, and connecting them directly to Mag Mel, an Exile ship. By using the ship’s ability to bring people back from the dead, The Reticle had what he thought to be an invincible army, entirely slave to his will. However, those living on Mag Mel found a way to cut the connection between The Reticle and the Cybrids, freeing them from his control. Many of these Cybrids attempted to return home, only to find themselves branded as abominations, exiled from their former homes.

In time, many of these Cybrids came to terms with their new mechanical nature and formed a community: New Communion. The Cybrids of New Communion adapted The Reticle’s Cybridization Process and began seeking out brilliant minds throughout the galaxy, offering them a chance to contribute to, and partake in, the experience of thought networking through Cybridization. Those who accepted their offer were granted eternal life through Mag Mel, and were welcomed into the community.

While consensual conversion is the respectable way to become a Cybrid, there does exist a black market for the creation of Cybrids. Some work in secret, experimenting on unwilling subjects, trying to twist the process to their own ends. New Communion does a great deal to seek out and eliminate all such operations, as they represent a threat to their way of life, and serve as a reminder of the darker parts of their history.

The Cybrid communities of today continue to grow, gathering to their cause other like-minded beings, gaining power and influence, and searching for ways to spread that influence across the galaxy.

If you are one of the lucky elite, you were converted after a long and intensive interview process that began when you were selected out of a large pool of eligible, willing candidates. You take pride in the opportunity given to you, and are more than happy with your new state of being.

Or, perhaps you were wealthy enough to pay for a black market Cybridization. In this case, it is likely the technician responsible for your conversion failed (or could not be bothered) to take your psychological profile into account.

Others, the unlucky few, were forcibly converted. If you are one of these, the likelihood that something has gone wrong in the process is quite high. Beyond that, this is not the life you asked for. You would gladly give up immortality to return to your former state.

You are generally detached from the culture and species you originated from, no longer seeing them as your kin. In some cases, Cybrids experience a sense of detachment from their selves as well, both physically (due to the physical modifications) and mentally. When you became a Cybrid, that became your identity. You are most comfortable when networking with a hive group, experiencing the heightened processing power of the collective state.

Cybrid Skill Paths are connected to areas of focus. Conversion Specialists are masters of Cybernetics and bringing others into the Cybrid lifestyle. Shadow Brokers use their newfound connections to gain influence within the underworld. Hive Sculptors seek ways to better integrate themselves with other Cybrids.

Cybrids start the game with the “Tactical Core” Cybernetic for no Tether Cost. This Core does not count as your first Cybernetic Core for the purposes of escalating Tether Cost.

Short Circuit – 5 Build – Periodic Attack – Tag Target Machine then choose one of the following; Target is Stunned, Target is Mute for one 1 Minute, or Target cannot use Cybernetics or Tech Items for 5 Minutes.

Cyber Suit – 6 Build – Permanent Special – For every point of Tether (Including Machine Racial Cybernetics Tether) you have spent into Cybernetics you gain +1 Permanent Body.

Origin of the Species – +1 and +2 build – Permanent Special – You may purchase Species/Race Skills from the specific Species/Race you were before you were turned into a Cybrid. So if you were an Elysian, you may purchase Elysian Skills. General Skills cost 1 Build more than the standard base cost. When purchasing this Skill for the first time you must also choose a Path on that Species/Race list as you would any normal Species/Race list, you may also purchase Skills from that Path at a cost of 2 Build more than the Standard Base Cost. When utilizing a Skill via Origin of the Species, you count as that Species in addition to being a Cybrid for 5 Minutes after utilizing the Skill. This second part of the Skill only applies to Periodic and Per-Event Skills.

Deja Vu – 4 Build – Periodic Attack – This Skill allows you to duplicate any Periodic Attack you know with an initial Build cost of 5 or less that you have just used. The Deja Vu version of the Attack must be done within 5 seconds of the original Attack against the same Target.

Conversion – 8 Build – Permanent Special – You gain the Skill “Implant” (see the “Engineer” Class List). In addition you may turn a willing viable Target into a Cybrid (any type of Human, Mutants, Zelnalak, Oniri, and Yana). This process takes 4 Events. During each Event you must Implant 1 new Cybernetic into the Target. At the end of the 4th Event you must spend 1 Hour doing the final Conversion. Before you begin this process you must get approval from 2 Plot Marshals so that the Willing Target understands everything involved with the procedure before you begin.

Energize – 4 Build – Per-Event Special – Spend 1 Minute Concentrating on a Friendly Target’s spent Cybernetic (you may also Target yourself). Cybernetic is refreshed and gains the use of its Periodic or Per-Event ability. This Skill has no effect on continuous Cybernetics. A Target may only benefit from this Skill Once Per-Event.

Command Word Cybrid – 4 Build – Periodic Mental Attack – Give a Target a 1 word command. Target must fulfill that Command to the best of their ability. Use of this Skill can be paired with a gesture such as pointing. Unless the Target is another Cybrid this Skill cannot be used to cause someone to throw their life away. The effect of this Skill lasts for 1 minute.

Willpower – 4 Build – Periodic Defense – Defends against all Mental Attacks, save for those that would cause you to suffer a Trauma.

Connections (Underworld) – 5 Build – Permanent Special – You begin each event with 2 Influence that may be spent on any Scheme directly connected to the Underworld.

[Hive Note: At the beginning of each Event you can create a “Hive” connecting up to 3 Machine Targets including yourself. Targets must be willing and you must spend 1 minute each networking them to the Hive. Hive also works on anyone with a Cybernetic. Each Hive Skill you purchase increases the number of “Hive” Targets you may have by 1. Multiple purchases of the same Skill do not increase this number.]

Hive Mind – 5 Build – Periodic Special – Defends you or any of your Hive members from a Mental Attack. You must be within Melee Weapon Range in order to use this on a Hive member. Once you purchase this Skill, if one member of the Hive is effected by a Mental Attack that is not Defended against, all members of the Hive within Melee Weapon Range are also effected by that Attack.

Hive Workers – 3 Build – Per-Event Special – Any Skill you use that takes time has its time reduced by 5 Seconds per Minute it takes for each Hive member you have assisting you, not including yourself. Hive members do not have to have any particular Skills to assist you. This Skill cannot be used in conjunction with any other time reduction Skills and cannot reduce the amount of time needed by more than half.