Weeds are alien plant creatures. They often inquisitive, and naive, but can also be quite cruel in the same way nature is cruel, as a force more than a will. They are all in some way designed to interface with sapient creatures, but have a tendency to understand the way other lifeforms from a viewpoint that could best be described as “clinical intuitiveness”.

A Weed is a plant doing its best to look like a human, but it is still clearly a plant. A Weed’s face is generally its most human characteristic, the most care having been put into making it resemble a human’s as much as possible. Skin should have a greenish tint that increases towards the edges of the face, where it may be marked with leaves or small networks of roots. The rest of the body, similarly, may have leaves, flowers, roots or vines in various places, to varying extents. These plant elements tend to be of whatever type was native where the Weed was born. Wilder Weeds may have a less humanoid, more plant-like forms.

Clothing is something of an afterthought, worn because Weeds are aware most sentients are more comfortable talking to clothed beings. They dress very simply, in natural colors and materials, with some even garbed in ‘clothing’ made entirely from parts of their own body, which they have grown for that specific purpose. 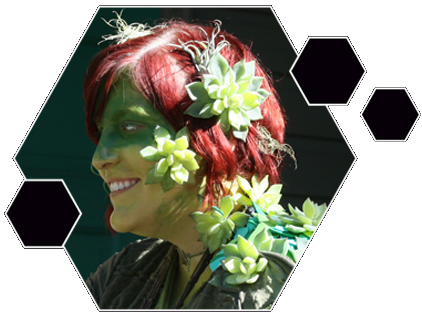 Prior to the start of the Exile War, the Exiles created Weeds to serve as their ambassadors to the Celestial Ascendancy. When the war began their role shifted, and they were used to sow discord and panic amongst the populace, akin to dropping leaflets over an enemy city. These Weeds were designed with short lifespans, most expiring after only a year or 2 from a process called the Withering. Some however learned how to not just survive the withering but harness the process and use it for growth and renewal.

Small populations of Weeds began to spring up on the periphery of society throughout the galaxy. These groups inevitably sought the shelter of their own kind, and avoided the fast and chaotic pace of the life after The Fall. Then the stars began to go out…

The Weeds created a new generation of seedlings, adapted for the modern world, and born with the desire to explore and discover the source of the growing darkness. Within a few years, the Weeds learned that they were not just created by the Exiles, but were in fact Exiles themselves. With each new Withering, a Weed expands, grows larger and more wild, after a few hundred thousand years of this, their bodies have advanced enough to become spacefaring vessels, able to violate the laws of our universe, and become demigods of the deep dark.

Weeds of today, especially the younger generations, have begun to assimilate into society to a greater degree. They have accepted their role as not just the creations of the Exiles, but the true children of the Exiles, and some have even begun calling themselves as such. And yet, the question remains, what happened to their forbearers after the Exile War? Why did the Exiles disappear so completely? While they search for answers, many have assumed the obligations of their parents, and seek to safeguard the galaxy against the coming darkness.

As a plant, your mindset and very way of being are distinctly alien to other organic species. Certain concepts may be completely foreign to you, and though you are able to grasp them on an intellectual level, they may never entirely make sense to you. Most Weeds have trouble understanding lies, and take a bit longer to assimilate into culture than standard humanoid species. However when they do finally assimilate, they tend to dig their roots deep and develop a complete and utter mastery of their surroundings.

You are likely far younger than your form would imply. Weeds are born as adults. Genetic memory is passed from the parents to the newborn. This memory tends to provide the basics; how to speak and a bit of knowledge about the world, but is purposefully incomplete to encourage the seedling to explore and fill in the gaps.

When dealing with others, Weeds show increasing difference and will try to work through everything as though it were a misunderstanding. Weeds only resort to violence when all other avenues have failed. Once they do become violent however, they will brutally and systematically destroy their opponents in the most efficient way possible.

Owing to their plant physiology, Weeds have a different concept of gender than those species where the physical sex is readily apparent. Weeds have 3 genders, usually referred to by the pronouns he, she, and it. Warrior types, are male. Female types are scholars, doctors of the mind, and speakers. Genderless types are the healers and builders. For example, while a Weed may appear as female, if they are a Defender they will identify as male. To complicate things further, Weeds have a passive gender, the gender they are considered at rest, and an active gender, the gender of the action they are taking. Weeds follow absolutely zero gender norms to which other species are prone, save for situations where they know they can use it to their direct advantage.

Weeds have adopted the Exile tradition of adding a syllable to their name with each Withering they undergo, so the older the Weed, the longer their name. For the sake of simplicity and brevity, most Weeds will only use their first few syllables as their public name.

Weed types are divided by gender lines. (Please take note of the paragraph directly above for more information). Male Weeds are designated as Protectors, and are cultivated for defense. Female Weeds are referred to as Ambassadors, and are the strongest seekers, the first to make alliances, though some fall prey to the old biological imperative to sow discontent. Genderless (or in some views, the most gender-fluid) Weeds are called Seed Shepherds, these are the healers and seek to engineer the the universe into paradise.

By concentrating for 1 minute, Weeds can regrow any Destroyed Limb or Sensory Organ. Each part regrown takes 1 minute of concentration.

Of Myself – 4 Build – Per-Event Special – You may use this Skill at any time to gain 3 Flora Components. This Skill can be used prior to Lay On.

Ignore – 4 Build – Permanent Defense – Spend 2 Stamina. Instead of taking the effect of a Mental Attack you stare silently skyward for 1 minute. You may take no other action other than to Defend yourself for the duration.

Young Exile – 8 Build – Permanent Special – You gain the Skill “Science X” (see the Universal Skills list). In addition to this you gain the Keyword “Exile Technology“, and may take part in any Tech Challenge involving Exile Technology.

Divine Interception – 5 Build – Per-Event Defense – Defends a Friendly Target from any Attack so long as you are within Melee Range of them. Tag Friendly Target with your Weapon to indicate that you have Defended the Attack.

Tough Exterior – 9 Build – Permanent Special – You gain a Soak of 1 against all Attacks. Soaks cannot reduce damage to less than 1.

First Contact – 5 Build – Permanent Special – Making a Contacts cost you half as much Influence (rounded up).

Infamy – 2 Build – Permanent Special – You have +1 Influence Per-Event to use explicitly against Factions for whom you have Negative Reputation. When purchasing this Skill you may choose one Faction, you are now Distrusted by this Faction.

Terror – 8 Build – Permanent Voice/Mental Attack – Spend 1 Stamina and 5 Seconds roleplaying with a Target who can hear you. You may choose for Target to be “Afraid” or “Panicked”. Each time you use this Skill during Combat it costs an additional point of Stamina for each additional use after the first, up to a maximum of 3 Stamina.

Shout – 9 Build – Permanent Special – When using any Voice Attack or Rhetoric you may select 1 additional Target.

Flourish – 5 Build – Permanent Special – Spend 1 Stamina in order to use a Treatment Skill on yourself. Treatment time is doubled for the duration of the Skill. This does not work in conjunction with Treatment Skills that fix Flaws or Traumas.

Verdant Restoration – 3 Build – Per-Event Treatment – Touch Target Weed. Target is immediately restored to full Body. This can also be used on a Weed Target in any stage of their Death Count.

Entangle – 5 Build – Per-Event Melee Attack – Tag Target. If Target is Friendly both you and the Target enter a Shielded State. While in this state you may Treat the Target using any Treatment Skill, including those that only effect Weeds. Shielded State ends after Treatment is finished or after 5 Minutes, whichever is longer. If Target is an Enemy both you and the Target are Bound from the neck down and remain so as long as you maintain contact with the Target to a maximum length of 5 minutes. Target cannot be Damaged directly while bound, but may be effected by Mental Attacks and Negotiate Skills. Any Damage or effects outside of this that Tag either of you are absorbed entirely by you. If you are rendered Unconscious or enter your Death Count this Skill ends immediately.