The Zelnalak are a highly adaptable, prolific blue and white furred humanoid species. They are well known for their friendly, affable personalities, their strong interest in learning about other cultures and species (and how to absorb them), and their excellent networking and community building skills.

The primary physical trait of the Zelnalak is a layer of short, downy, blue and white fur which covers their entire body (this may best be represented with makeup rather than actual fur). Their faces and fronts are white, with white also along the insides of their arms and legs. The edges of the face, back, and sides of the body and limbs are a vivid blue. This patterning is almost universal amongst Zelnalak, though occasionally one will be born with these colors reversed.

Zelnalak enjoy wearing clothing that is identified with other cultures, often embellishing or accentuating it to what some might consider an excessive degree. The Zelnalak do not have a style that is specifically their own. 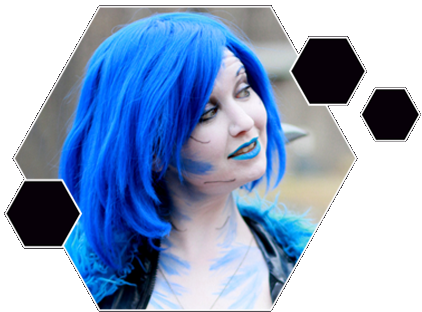 The first reports of the Zelnalak species came near the end of the Gresh Collective, during the Scourge War 1 million years ago. They were one of few species to benefit from that conflict, as the vacuum of power allowed their kind to find homes across a wide swath of the galaxy. The Zelnalak were a hardy species, able to adapt to most environments they found themselves in.

It soon became apparent that where Zelnalak settled, more Zelnalak would quickly appear. Unlike any other known sapient species, Zelnalak possess the unique characteristic of being almost universally compatible – they are capable of mating with most biological life they encounter. In addition to this, their genetics are supremely dominant: any child born of a Zelnalak will also be Zelnalak, bearing (if at all) only superficial traits of the non-Zelnalak parent. With a rapid period of gestation and a swift transition into maturity, the Zelnalak are capable of creating a substantial population of their kind in any environment after only a few generations. Left to their own devices, within a few hundred years they can become the dominant species on any planet, continuing to gobble up genetic real estate until the native species goes extinct. The Zelnalak were so friendly and helpful that few species were able to realize exactly what was happening until it was too late.

In spite of having been around so long, Zelnalak have surprisingly little in the way of their own recorded history and culture. They prefer to adopt the cultures and histories of the peoples they encounter, weaving them together into a strange tapestry they call their own. For the Zelnalak, history is more about the story, and less about the facts.

During the rise of the Celestial Ascendancy, the Machine Mother recognized the threat the Zelnalak might pose to humanity. In order to minimize the danger, she released a nano-virus into the Zelnalak population, designed specifically to suppress their natural pheromones and therefor make other species less receptive to their charms. In the centuries after the Fall, many Zelnalak scientists searched for a way to reverse this change, but so far they have been unsuccessful.

The Zelnalak have spread across the galaxy, becoming a significant component of every multispecies group and empire. Their homeworld of Zel now serves as one of the primary capitals for the Trove, a multi-species federation born out of the ashes of the Celestial Ascendancy. Zelnalak are remarkable for their ability to create a vital and thriving community under any circumstance – however, one should never forget that they are, in truth, an aggressively invasive species.

You are helpful, friendly, and generally good spirited, the kind of person others love to have around. When not the leader of a team, you are the essential glue keeping it together. You are fascinated by other species, and enjoy learning about all aspects of their lives.

To others, you sometimes come across as overly friendly and overly emotional. You prize cooperation over competition, and do not easily become angry. You will not resort to combat unless all other avenues have been exhausted. An early surrender is seen by Zelnalak as a valid combat strategy (one which has won conflicts in the past after a long period of biological attrition) and it is not unheard of for a Zelnalak to defect to the other side of a conflict if they believe it to be for the ultimate good.

Your devotion to a community you’re involved with is extremely strong. However, this feeling is generally towards the group itself, rather than the individuals which make up that group. If sacrifice will serve the greater good of the whole, you will support it. Because of this tendency, many younger Zelnalak easily fall prey to mob-mentality in their communities, while older, more experienced Zelnalak are better able to exert their individualism.

While you may have many acquaintances and good friends, you hold aside the part of yourself which would allow you to be truly close to others, making exceptions only for your mates and your children. Zelnalak make excellent parents.

You readily absorb the cultures of people around you, making them your own. You are a great mimic, but often your interpretation is skewed, either through misunderstanding or by way of having mixed things up with another culture’s traditions. In such cases, it is hard to persuade you that you are mistaken.

Zelnalak have both a biological and cultural taboo against breeding with other members of their own species when other viable species are present. If you encounter a species with which you cannot breed, you may be dismissive or even hostile toward them – though to avoid being disruptive, you will generally not do so in public.

Zelnalak babies are given their first-name in the style of the non-Zelnalak parent’s culture – because of this, there are no family names or names that carry on longer than one Zelnalak lifespan. Some Zelnalak keep their first-name for their entire life, in recognition of their parents’ achievements, but once they reach adulthood it is more common for them to change it to better fit the culture they are active in. They view their names as adornments, easily swapped out for something more appealing or useful.

Cultural Liaisons excel at networking and community building, and through this collect cultural data for Zelnalak records. Swashbucklers embody the archetype of the charismatic, heroic fighter, as seen through the eyes of Zelnalak historical documents. Geneticists specialize in collecting and analyzing genetic information on other species, with the primary goal of improving upon their own.

Zelnalak can always spend 1 Stamina to call the Skill “Harmless”. This is a Mental Attack that prevents someone from Attacking you unless you engage them in Combat.

Threat Assessment – 4 Build – Permanent Special – Study Target for 1 Minute. You may ask a Marshal 1 Yes or No question regarding the Target. You will receive a null answer if there is not a clear Yes or No response. You may only use this Skill once every hour. You may not use this Skill on the same Target more than Once Per Event. A Target who you have used this Skill on is considered “Threat Assessed” for the remainder of the Event. This Skill cannot be used to Diagnose a Target, save for providing very general information (you can determine if a Target has a Trauma or a Disease but cannot delve any deeper).

First Contact – 5 Build – Permanent Special – Making a Contacts cost you half as much Influence Rounded Up.

Pacifism – 3 Build – Periodic Defense – Defends against any Skill that would cause you to Attack or engage in Combat.

VIP – 3 Build – Per-Event Proficiency – You have +1 Influence per Purchase of this Skill. This Influence is gained at the beginning of an Event and any unspent Influence is lost at the end of the Event.

Tailored Pheromones – 5 Build – Permanent Voice/Mental Attack – Spend 5 Minutes roleplaying with the Target outside of Combat and spend 3 Stamina (Stamina spent this way cannot be restored until the end of the Event unless you choose to end the effect. To end the effect you must find the Target and tell them that the effect has ended). For the remainder of the Event, Target cannot engage in Combat with you unless you Attack them first. This Skill costs 1 Stamina if you have used Threat Assessment on the Target first.

Detailed Assessment – 3 Build – Periodic Special – Must be used in conjunction with “Threat Assessment”. Instead of asking the Marshal a Yes or No question regarding the Target, you may ask a non compound question consisting of 6 words or less.

Would You Kindly – 5 Build – Periodic Special – Speak to friendly Target for 5 minutes. Target gains the Skill “Bodyguard” (see the Crusader Class list) and immediately uses it on you if they are within Traverse distance of you when the next Combat occurs. Target must make reasonable effort to protect you, but will does not have to do so at the cost of their life, or the lives of others.

Pistol and Sword – 8 Build – Recurrent Attack – Can only be used after successfully Tagging a Target with a 1 Handed/Small Weapon. Your next Ranged Attack does Double Damage. Tag Target and say “Critical Attack X Damage” where X is equal to twice your normal Damage. This Attack must be the next Attack you make, and must be used within 5 Seconds of the initial Melee Attack.

Avoidance – 6 Build – Periodic Defense – Defends against any Attack from a “Threat Assessed” Target.

Weak Point – 6 Build – Permanent Special – You do +1 Damage and have a Soak of 1 against “Threat Assessed” Targets. Soaks cannot reduce Damage to less than 1.

Zelnalak Craft: Tinctures – X+2 Build – Permanent Crafting Knowledge – Allows you to read, understand, learn and utilize Rank 1 and 2 Tincture Plans. When purchasing this Skill you gain a Rank 1 and a Rank 2 Tincture Plan of your choice, along with 1 random Rank 1 and Rank 2 Tincture Plan. Crafting Skills have a doubling Build cost after every other Purchase (2, 2, 4, 4, 8, 8, etc). The cost of this Skill is 2 Build + wherever it falls along that line. This means that if this is your first Crafting Skill purchase it would cost 4 Build, but if it were your third, it would cost 6 Build.

Enemy of My Enemy – 4 Build – Periodic Treatment – Can only be used on a Threat Assessed Target. Spend 5 Minutes Treating Target in the Critical Stage of their Death Count. Target is restored to 1 Body and cannot actively engage in Combat for 30 minutes. Target may Defend themselves and use any non-combative Skills during this window.

Research Scientist – 9 Build – Permanent Special – You gain the Skills “Research X” with the subtype “Xeno-Biology” and “Science X” with the subtype “Bio” (see the Universal Skills list for both of these Skills). Purchasing this Skill does not count as purchasing the Skills “Research X” and “Science X” and you may Purchase those Skills again allowing you to take a second subtype.