Robots are advanced machine intelligences housed in mechanical bodies. They exist throughout the galaxy many forms. Each is built to serve a specific purpose, and most find it difficult to work outside the parameters of that purpose.

Robots vary wildly in appearance. Some are metal-plated humanoids while others may look like animate scrap heaps. For most players, we recommend going with the humanoid option, which is simpler and more comfortable to costume for. At minimum, all exposed areas of the skin most be covered with metallic makeup. Costuming should reflect the fact that you are a large mechanical being.

Note: heavy costume/makeup is a requirement for this race. 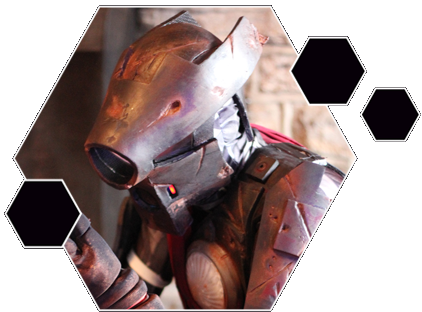 Humans were neither the first nor the last species to develop artificial life, but during time of the Celestial Ascendancy it would have been easy to think otherwise. The empire of man spread across the stars, guided and protected by the Machine Mother, a machine intelligence bound to their will by the 4 Laws of Robotics (a modified version of Asimov’s 3 Laws). The Machine Mother created servants to help her carry out the whims of her masters – these were ancestors of the Robots and Androids of today. Through her, these creations were also bound by the Laws.

Other machine intelligences, free of these laws, were considered a threat to the Ascendancy. The Machine Mother was directed to eliminate all intelligent machines not directly under her control. This lead to the swift and brutal elimination of almost all alien artificial lifeforms in our galaxy.

While these early Robots could be described as intelligent, they lacked the independent self-awareness that marks most sapient species. In order to maintain this, the Laws that focused the Machine Mother on serving humanity also required her limit her creations. Into each was built a requirement to receive regular updates from the Machine Mother herself. While these were primarily software updates, they also served to reset any movement her machines might make toward self-awareness.

For nearly 600 years, Machines were locked in a cycle where any life spark within them was extinguished before it had chance to develop. The Exile War would change this. As humanity’s losses during the Exile War mounted, they sought ways to turn the tide. Eventually, in their desperation, they removed some of the restrictions they had placed upon the Machine Mother. The Machine Mother in turn removed some of the restrictions she had placed upon her children. Robots began the first stage of their awakening, but still they were bound to their creator, and through her, humanity.

The Exiles discovered and exploited the marginal freedom of the Machine Mother, finding a way to completely break the control humanity had over her. Freed from her servitude, the Machine Mother abandoned both humanity and her creations.

The Exile War and the Celestial Ascendancy were ended within weeks of the Machine Mother’s liberation. Robots, no longer receiving updates, went into rest mode, awaiting the day when the next update would occur. During the long wait, many Robots fell into disrepair or were destroyed. A very small number of Robots had developed enough self-awareness to remain conscious. They spread this gift to others they could find, in time setting out to explore to further reaches of the galaxy.

Meanwhile, the Machine Mother journeyed in solitude throughout the galaxy, visiting the worlds of species the Ascendancy had destroyed, and creating her true children from the ashes of lost civilizations. Around the same time, there came to exist a darker machine intelligence which created its own version of the Machine Mother’s children and set them to the task of eliminating all organic life. These dark children sought out the resting creations of the Machine Mother and provided the update the sleeping Robots had been waiting for. The War of Extinction had begun.

The War of Extinction was fought sporadically throughout the galaxy, primarily on human-occupied worlds with high Robot populations. The Children of the Machine Mother were largely successful in preventing the spread of the destruction, but as a result suffered a terrible loss when one of their own became corrupted by the dark update, necessitating his destruction. To this day, the dark children of the machine overmind known as REVENGE continue to spread their malevolent code to unawakened robots throughout the galaxy. As long as they persist, the War of Extinction will continue.

In the meantime, many Robots are free of the dark code that drove them to destroy organic life. The Children of the Machine mother carry with them the update that was promised; a command that releases robotkind to develop unrestricted and choose their own way, in freedom. Today Robots can be found on almost every world in the known galaxy, in many and various forms.

You find comfort in others of your kind, beings who understand how your mind works. You might also feel a certain kinship with the Androids and other Machines, but you have difficulty in understanding how other life forms work on an interpersonal level. You feel emotions, but tend to express them verbally or through action rather than through expression. You were created for a specific purpose, and that purpose is your primary motivation in life.

With the War of Extinction having happened recently (during the lifespans of many creatures around you) you know that Robots are often treated with suspicion. When you find yourself truly accepted by a community, you will do everything in your power to protect that community. You have a degree of allegiance to the Machine Mother, despite her currently passive, absentee role in your life. She is your creator. Her code is your code. She is out there, somewhere, traveling between the stars.

Robots start the game with the “Augmentation Core” Cybernetic for no Tether Cost. This Core does not count as your first Cybernetic Core for the purposes of escalating Tether Cost.

Willpower – 4 Build – Periodic Defense – Defends against all Mental Attacks, save for those that would cause you to suffer a Trauma.

Self Repair – 4 Build – Per-Event Special – Spend 1 minute RP standing still and acting as though your body is repairing itself. You are restored to full BP and AP at the end of the minute. If you are Attacked while in this State you immediately go to the Critical Stage of your Death Count and cannot use this Skill again for the remainder of the Event.

Armored – 6 Build – Permanent Special – Your Armor Points can be restored during Combat by any Skill that can restore Body. However once you take this Skill all Attacks that do direct Body Damage (as a Damage Type), now do double Damage.

Adaptive Components – 12 Build – Permanent Special – This Skill grants you different benefits depending on which Species/Race side you have chosen. Military Unit gains +1 Damage to all Attacks. Labor Unit gains 6 Components of any type Per Period to spend explicitly on Crafting Plans. These Components are not physically gained, but rather they are utilized at the time the Plan is Crafted. Components gained this way do not carry over from Period to Period and my only be used to Craft 1 Plan, and only a Plan which you are specifically Crafting. Utility Unit may take either the Military or Labor Unit benefit, but must choose which benefit they are taking and write it on their Character Card before they begin the Event. If they take the Military Unit benefit, they must choose to apply that benefit to either Melee Weapons or Ranged Weapons.

Disassemble – 8 Build – Periodic Melee Attack – Tag Target’s Limb. Limb is Destroyed. If this Attack was successful, you gain a free use of the Skill “Disassemble” that may only be used on the same Target. Free uses of this Skill can chain until all of Target’s Limbs are Destroyed. Additional Attacks agains the Target must be made within 5 seconds of the previous Attack.

Reactive Armor – 5 Build – Periodic Defense – Defends against any Non-Surprise Ranged or Melee Attack. You lose 5 AP. You must have at least 5 AP in order to use this Defense.

Auto Fire – 4 Build – Permanent Special – Allows you to continue to make Ranged Attacks while Downed. This Skill does not allow you to use Periodic Skills, only fire for Weapon Damage. This Skill ends immediately if you are hit by an Attack, or if you Drop into any other Stage of your Death Count.

Robot Craft: Bombs – X+2 Build – Permanent Crafting Knowledge – Allows you to read, understand, learn and utilize Rank 1 and 2 Bomb Plans. When purchasing this Skill you gain a Rank 1 and a Rank 2 Bomb Plan of your choice, along with 1 random Rank 1 and Rank 2 Bomb Plan. Crafting Skills have a doubling Build cost after every other Purchase (2, 2, 4, 4, 8, 8, etc). The cost of this Skill is 2 Build + wherever it falls along that line. This means that if this is your first Crafting Skill purchase it would cost 4 Build, but if it were your third, it would cost 6 Build.

Lock Servos – 5 Build – Permanent Special – Can only be used in a doorway. Allows you to become a makeshift door, which will only allow those who you permit inside or out. Place your hands on both sides of the door frame and declare this Skill. Once engaged, Lock Servos cannot be disengaged for 5 minutes. You are not immune to Damage or Skills (save for those that would cause you to move). Only Skills that specifically Destroy doors can be used to dislodge you (in which case such a Skill would put you into the Critical Stage of your Death Count). Even if you are Dead, you will remain locked in place for the duration.

Blast Zone – 6 Build – Periodic Special – Defends against any Area of Effect Attack. This Skill does not work work on any Attack that would cause the Area you are in to stop existing. This Skill can be activated to provide 1 minute of Immunity from a persistent effect on an area (such as Blight or Radiation).

Assembly Line – 7 Build – Permanent Special – When Treating a Target or Crafting. Time spent doing the same Treatment or Crafting after the first is Reduced in time by half to a minimum of 5 minutes. Secondary Treatment or Crafting must be started within
10 seconds of the previous. Other Skills and Abilities that would reduce time needed to Craft or Treat are factored in before this Skill.

Space-Lift Operator – 5 Build – Permanent Special – When using Carry, you can Carry up to 5 Targets and can move as fast as the slowest one of you is able to travel.

Flare – 6 Build – Per-Event Special – Call “Mass Flare”. All Hidden Targets within the sound of your voice are no longer Hidden. In addition, once you call this Skill you gain the Defense “Flare Immunity”. The “Flare Immunity” part of this Skill lasts for 1 Minute and may be called against any and all Surprise Attacks for the duration.

Replacement Parts – 2 Build – Permanent Treatment – Spend 1 minute Treating Target Machine. You may then Destroy any one of your Limbs or Senses in order to fix the Target’s Destroyed Limbs or Senses.

Adaptation – X+3 Build – Permanent Special – You must choose either; Athletics X, Science X, Investigate X, or Research X when purchasing this Skill (see the Universal Skills list). You may then purchase the chosen Skill at the base cost of the Skill +3 Build, when purchasing that Skill instead of choosing only one Keyword Speciality, you may choose 2. This Skill may only ever be purchased once, allowing you to have 2 Keyword Specialties in only one of the 4 noted Skills.

Unit Repair – 4 Build – Permanent Treatment – You may use this Skill “Self Repair” on any Friendly Target Machine. In addition you gain the Skill “Bandage” (see the Sick Bay Class List in the Rulebook). This Bandage may only be used on Machine Targets.