The massive asteroid scrap-station known as the Elysium is home to a group of humans known as Elysians. They pride themselves on their cleverness and cunning, and live by one law alone: “To Hold is to Own”. Regarded by many as thieves and criminals not to be trusted, the Elysians have made strides in recent years and are slowly becoming known for their advances in medical research and their hard stance against the forces of Entropy.

The key to Elysian clothing is dressing in whatever style works for what you are trying to accomplish. Most Elysians dress for concealment (both of themselves and their possessions) but they are also known for flashy displays of color and wealth. All Elysians must wear a scarf or vest festooned with pins and trinkets. These pins represent their wealth and the possessions they do not carry on their person, and are an intrinsic part of their culture. 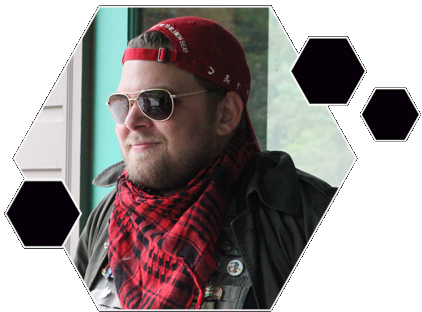 The Fall of the Celestial Ascendancy left many ships drifting aimlessly through space. In some cases, out of a desperate will to survive, the inhabitants of these ships managed to teach themselves how to operate the vessels that were previously operated entirely by machines. In the Bard System, these fortunate survivors banded together with others who shared their fate. As resources grew scarce, the first Syndicates formed out of the chaos.

In 169NA, a massive abandoned asteroid space station (later revealed to be the lost Aesir world-ship Elysian Fields) was found adrift in the Bard System. It was claimed by the Syndicates and christened the “Elysium”. Those who came to live there became known as Elysians, a people unified in their embrace of The One Law: “To Hold is to Own.”

Unbeknownst to the majority of the settlers of the Elysium, there was a darkness at the heart of the station which would taint the lives of Elysians for generations. In 213NA the most powerful of the Elysian Syndicates, Caduceus, was revealed to have ties to an Entropic Entity known as The Wurm. The Wurm had used Caduceus to cultivate a Host through which it might incarnate, and from which it could better control and manipulate the actions of those who lived on the Elysium. Seeking to crush Caduceus, an invading force discovered the Host and destroyed it, unseating Caduceus and breaking the power the Wurm held over the Elysium.

It was soon found that the Host’s roots had twisted their way throughout the Elysium on a fundamental, physical level. With its death these roots crumbled, and the station began to destabilize. The situation deteriorated further when combat outside the station and riots among the Elysian population within caused irreparable damage to the already-weakened station. Two Elysians sacrificed themselves, merging with the Elysium in order to fortify the superstructure and save the inhabitants.

With the fall of Caduceus the power of the Syndicates began to wane, and the dregs who lived in the vents and less hospitable sections of the station now found they finally had a voice. A ruling council was formed and a somewhat limited form of democracy took hold. The Syndicates still took advantage where they might, but they were no longer the all-powerful and allconsuming superpowers they had been.

In the wake of all this turmoil, three more major shifts occurred within the Elysium. First, the Elysians began to look beyond the borders of the Bard System. With newly acquired FTL drives they ventured out, building stations in the outer reaches of many neighboring systems. Second, they became known for medicine and medical research, thanks in part to the lifting of certain restrictions following Caduceus’ departure. Third, Elysians became fierce opponents of the forces of Entropy – in particular the Wurm, who had held their people in thrall for decades. They spread their knowledge to other cultures in the new systems they inhabited, teaching others about their enemy, and how it may be fought.

The Elysians of today are a powerful people, strengthened by hardship and prepared to venture out and face the unknown.

Above all you abide by one law: To Hold is to Own. You recognize that in most cultures, this makes you a thief, but you see no issue in that. On the Elysium, thievery is both a means by which you survive, and a spiritual act. This is the system you’ve grown up with. Only the clever thrive on the Elysium. You’ve cultivated your skills accordingly, and you are always focused on working your way up the societal ladder.

Though their power is greatly diminished, the Syndicates still hold sway over much of the Elysium. It is likely you still remember the days when they were the only power of any note on the station. Perhaps you had aspirations to one day be a Syndicate Head. Perhaps you still do.

You have a strong bias against Entropic Entities – in particular, the Wurm.

Your scarf/vest are part of your identity which no Elysian would steal from you. If an Elysian were ever to lose these items, you would feel obligated to aid in their recovery.

Dregs are the lowest of the low. They live on stale recycled air in the worst sections of the Elysium, and are always scraping to get by. Their continued survival is achieved through a combination of skill and luck. Pilgrims are ambassadors of the One Law “To Hold is to Own”. They have traveled beyond the walls of the Elysium to search for treasures to bring back to their people. By tradition, all Elysians are required to go on Pilgrimage; most return, but some choose to remain Pilgrims and seek their fortune in other lands. Syndicate Members are part of the institution. Some are born to the role, others earn their way inside. Players beginning as Syndicate Members start at the bottom rung of the ladder, but that just leaves room to climb. Watch out on your way up; those you knock off the ladder may be right behind you tomorrow.

All Elysians start with +2 Stamina.

Suckle – 3 Build – Periodic Special – When a Target within Melee Range of you utilizes a Skill, or is the Target of a Skill, you may call “Suckle” to duplicate that Skill on yourself. This only applies to Skills whose effect is instantaneous, and whose conditions you are able to meet. So, you could not Suckle “Hide” unless you were already within Cover. Likewise you could not Suckle “Defensive Stance” unless you had a Shield. You cannot Suckle any Skill that is offensive in nature. You cannot Suckle a Suckle.

Pick Pockets – 4 Build – Periodic Special – Allows you to steal an object from a Target’s pocket. Requires a Marshal to be present before utilizing this Skill. Interact with Target for 1 minute. At some point within that minute you must lay a hand on the pocket you wish to steal from for at least 5 Seconds (this need not be continuous). The Marshal will then go to the Target to indicate that they have been Pick Pocketed. If the pocket you wish to steal from is in a place that common decency would not allow you to touch, you must inform the Marshal and they will indicate the area you must touch in order to complete the transaction. You may indicate to the Marshal that you are looking to steal a specific object from the Target’s pocket, if the Target has that object in that pocket you receive it. Otherwise, you just get one random object in the Target’s pocket. Unless one has a Defense against Pick Pocketing, the Skill is generally undetectable… however as this is a Marshaled Skill, the Marshal may base your success on how you interacted with the Target. This Skill may also be used in reverse, to place an item into someone’s pocket.

I Know My Kind – 6 Build – Periodic Defense – Defends against any Attack from an Elysian.

Feign Death – 2 Build – Periodic Special – Allows you to lay Prone and appear as if Dead. Any attempt to Diagnose you only reveals that you are Dead. While utilizing Feign Death you are considered to be in a Surprise State.

Claustrophoria – 6 Build – Permanent Special – While indoors, you may may become Hidden by achieving Cover and spending 1 Stamina.

Scurry – 5 Build – Periodic Defense – Defends against any Ranged or Melee Attack so long as you are within touch distance of a Cover or you are Hidden.

Contraband — 4 Build — Per-Event Special — At any point during the Event you may declare a single item. So long as you are able to physically hide this item on your person, it cannot be found via a casual search. This Skill provides you with the reasonable benefit of the doubt should the item become briefly visible, such as a shotgun you have tucked away in your trench coat becoming partially visible as you move down a hallway. You can pull an object in and out of Contraband at will, this does not constitute a separate use of this Skill. Additional purchases of this Skill allow you to declare additional items. The items must be singular, and cannot be used to contain other items.

Safe Passage – 5 Build – Periodic Defense – Defends against any Ranged, Melee or Metaphysical Attack. Can only be used when no Friendly Target is within Traverse distance of you or when you are not in Combat (this Skill would allow you to Defend against the first Attack that would initiate Combat).

Rummage Blessing – 2 Build – Periodic Special – When attending to a Target in their Death Count, Dead, or Unconscious, you may utilize this Skill. Target must hand you 1 Component, so long as they have at least 1 Component on their person. The Target does not realize you have stolen from them. This Skill can be blocked by any Skill that would defend against Pick Pockets.

To Hold is to Own – +1 Build – Permanent Special – When purchasing Rituals (see the Rituals Supplemental Rulebook), you may purchase any non-Entropic Ritual at the cost of +1 Build.

From the Top – 5 Build – Permanent Special – At the Start of each Event you gain 1 Random Component for each Contract you have. In addition you are always considered to have 1 Contract for the purposes of this Skill as well as Smuggling rolls.

Impressive (Elysium) – 6 Build – Permanent Special – All Schemes started by you that directly involve the Elysium or Elysians or any property directly owned or operated by Elysians cost half Influence rounded up to a maximum discount of 10 Influence, whichever is less (for example if the Scheme costs 9 you this Skill would reduce the cost to 5, half rounded up. If the Scheme costs 40 Influence, this skill would reduce the cost to 30 as this is the maximum discount you can receive). This Skill does apply to all Standard Schemes. Direct involvement with the Faction in question is up to the discretion of the Plot Marshal, however a general rule of thumb regarding this is as follows; if the Scheme is primarily about or primarily involving the Faction it is good, if the connection is tangential, it is not.

Intimidate – 2 Build – Periodic Voice/Mental Attack – Spend 1 Minute talking to Target. Then choose for the Target to either be Panicked, Afraid, or Enraged. Target is effected as per that Status effect.

Quick Escape – 5 Build – Periodic Special – Place your hand on a window or door, you appear on the other side. Go out of game until your reach the exact spot where the door or window would let you out. You appear In Game on the other side. This Skill can only be used to escape from a dangerous situation out of a location. It will not allow you to escape into a building.