Mutants are creatures who evolved through mutation into something stranger, perhaps even greater, than their human ancestors. They are a diverse species, appearing throughout the galaxy, even in places where no clear cause for their genetic aberration is apparent.

Mutants all possess some degree of physical mutation which prevents them from passing as a normal human. These can manifest as mismatched or asymmetrical horns, patches of scaled, rough, or mottled skin, strange looking or extraneous eyes and ears, growths and boils, extra appendages, etc. Players are encouraged to look at the Trauma and Flaws section of the Rulebook for inspiration. Players should also take care to make sure they are not easily mistaken for an established alien species. While some mutations may be hidden by clothing such as scarves and gloves, they should always be appropriately represented beneath the covering. In terms of garb, most Mutants dress unobtrusively – they get enough attention as it is. They tend to dress in the style of the locals. 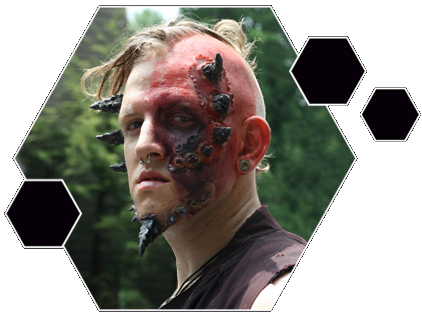 Environmental hazards, be they natural or man-made, have long been the bane of the human genetic code. During the halcyon days where the Machine Mother watched over mankind, nanomachines coursed through the veins of all humans within the empire, correcting flaws, providing immediate medical aid, and even reversing the aging process. These nano-machines could heal all but the most serious of maladies, and genetic mutations soon became a thing of the past.

In order to power the technology which allowed the Celestial Ascendancy to conquer and rule the stars, a complacent humanity turned to Eberron. This highly unstable substance had been discovered long before the Ascendancy, but had never been put to use due to the effect it had on humans who suffered even the smallest bit of exposure to its radiation. Lesions, mutations, and genetic damage became evident within a very short span of time. Those who experienced longer exposure showed greater physical mutation, and frequently developed psychokinetic abilities and other permanent mental anomalies.

During the Ascendancy, the nano-machines were able to repair the damage done by Eberron radiation before it could manifest. Humanity was able to harness the power of Eberron without fear of its side-effects, and it quickly became the empire’s primary source of power. The threat this posed was not fully realized until after the Fall, when the nano-machines abruptly became inert. Signs of mutation began to appear at first only in those who lived or worked near Eberron reactors, then more widely as the reactors themselves began to break down.

The disaster was more easily handled on hospitable worlds – many who lived near reactors were able to move away and settle elsewhere when the first signs of mutation appeared in their communities. On the many planets where the natural environment was hostile to humans, however, the protective dome habitats quickly became radioactive death traps.

From the chaos that followed, a new species of mutant life arose and began to re-create a form of society for themselves. In general, the rule was survival of the fittest – the most gifted mutants (and inevitably the most deformed) rose to the top of the hierarchy. The Mutant Elite, monstrous creatures with the ability to mentally dominate lesser beings, took the highest role in society, exerting their control to enslave the populace. Many of those who were able to resist, fled, while others, content with their lot, stayed.

Many Mutants who attempted to reintegrate with human society found themselves outcast. Other humans feared them because of their deformities and psychic abilities, and many saw their presence as a blight upon the community. Even humans who had only experienced slight exposure to Eberron radiation might come to find the effects passed down to their children – something that many would sooner blame on the arrival of a new mutant in town than upon their own damaged genetic code. While this prejudice continues in some places, the existence of Mutants has become commonplace enough in most places for them to be treated with a degree of dignity, if not respect for their unique abilities.

It should be noted that despite advances in technology, no treatment has been found that can reverse the effects of Eberron Radiation. Those who become Mutants will forever be Mutants.

Playing a Mutant is at least in part about suffering. Aside from the general problems that your various mutations might cause, Mutants are prone to severe headaches, and general health problems. Mental trauma is also common and varies wildly depending on how you grew up.

If you were part of a Mutant mono-culture, you’ve lived most of your life in servitude to the Mutant Elite, whose power is so overwhelming you have no choice but to obey their whims. Now you are removed from that direct control, whether you are an exile, an escapee, or you have been sent as trusted ambassador. If you lived in a mixed community, you have undoubtedly suffered some degree of prejudice. There are always those who will fear that which they do not understand.

No matter where you were born, it is likely you possess an alien worldview. Mutants tend to view standard ideas of beauty and morality with some degree of contempt.

The 3 Mutant Skill Paths roughly translate to conditions you lived under growing up, or the place you were in just before entering the gameworld for the first time. These paths are not absolutes, and you are free to choose the one you like the most for your Character.

If you are a Drudge, you were likely enslaved for some if not all of your life leading up to now. At the very least, you have grown up under the thumb of other more powerful Mutants. If you are an Outcast, you left Mutant society under questionable circumstances, and must now find your way in the wider universe. If you are a Pariah, you grew up in human society as part of the small subset of the population who are born as Mutants. You likely experienced varying degrees of prejudice growing up, depending on how tolerant the society you lived in was.

Mutants take no Stamina or Body Damage from Radiation.

Mind over Matter – 8 Build – Permanent Special – Any Skill that requires 2 or more Stamina in order to activate has its cost reduced by 1 Stamina.

Resolve – 6 Build – Periodic Defense – Defends against any Attack that would cause an Trauma.

Mental Bypass – 5 Build – Per-Event Special – Spend 1 minute roleplay concentrating. You regain full Stamina. This can be purchased multiple times however it can only be used once per Combat.

Suppress – 5 Build – Permanent Treatment – Spend 2 Stamina. Requires 1 minute of roleplay with Target. For 1 hour Target’s Traumas are quelled. A Target may not benefit from this Skill more than Once Per-Event.

Psychic Healing – 6 Build – Permanent Special – Spend 2 Stamina. Point at Target within Traverse Distance who can clearly hear you. Target is healed for 5 Body.

Give me your Pain – 5 Build – Permanent Special – Spend 2 Stamina. You may transfer all Negative Temporary Status Effects from a Target onto yourself. If you have any Special Immunity against that Status Effect it does not apply when using this Skill. Target must be within Melee Weapon Range.

Mind Slip – 6 Build – Recurrent Special – Spend 3 Stamina. You are Hidden for 1 minute but can only move at a heel to toe pace. This Skill ends immediately if you interact with a person or object (objects include furniture, trees and doors) even accidentally.

Implant Suggestion – 5 Build – Recurrent Mental Attack – Spend 4 Stamina. Can only Target someone wearing the Negotiate Symbol. Allows you to implant a thought in the Targets mind that they are compelled to carry out immediately. This thought must be in the form of a single sentence. This will not cause a Target to work against their own nature. This cannot be used on the same Target more than Once Per Event.

Save Me – 3 Build – Periodic Defense/Mental Attack – Can only be used while you are in the Downed or Out stage of your Death Count after someone has declared an Attack against you. Attack fails, Target must do everything in their power to bring you back to full health. Target will believe for 1 hour that the desire to save you is their own. Even if this is Defended against, the initial Attack against you fails.