The M’kai are an outlandish, purple-skinned alien race who traveled in the wake of the Exiles to reach our galaxy. They are clever opportunists who put survival and advancement above all other concerns. A M’kai must know where it stands in the social order, the first thing one will do upon entering an unfamiliar situation is find out who is above and below them in the chain of command.

To properly represent this species, all exposed skin must be covered with purple, violet or lavender make-up. M’kai have strangely textured hair, best represented with brightly colored yarn in shades of teal, blue, purple and magenta. Head wrappings that cover all exposed hair are also acceptable. M’kai have two delicate white or clear antler-like antennae. They dress in vivid colors, and have a fondness for asymmetrical clothing.

M’kai are a high makeup race, and costuming must adhere to the requirements stated above and within the M’kai Costuming and Makeup Technical Guide. You must seek approval for your costume before playing a M’kai. 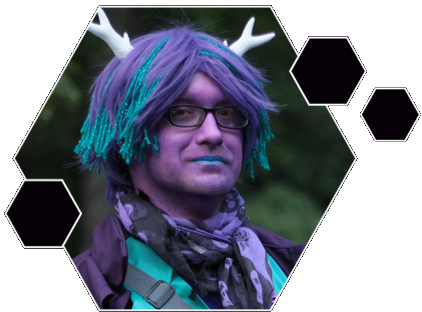 10,000 years ago the M’kai left their home galaxy, following in the wake of the Exiles, who they viewed as their gods. When the M’kai Broods finally arrived in our galaxy, they found they had lost track of the Exiles. No longer having a specific course to follow they quickly spread out, taking advantage of the vacuum of power that was created after the Fall of the Celestial Ascendancy.

Due to the biologically-encoded animosity the various M’kai Broods have toward one another, each Brood claimed an area of influence within the galaxy, sharing contact only through intermediaries. This network of influence has allowed them to form an expansive shadow empire, The M’kai Consortium. While their actual holdings are meager, their ability to control is not. The Consortium holds power through channels which most species would describe as underhanded, but which fit perfectly within the M’kai worldview.

The M’kai worldview is largely defined by their biology and life cycle. They are not born as sapient creatures; in fact, the broodlings look very little like their adult counterparts, they more resemble fleshy, purple insects. M’kai are born in vast broods and spend the first 3 years of their lives in monitored containment, killing and maiming one another until one M’kai emerges into sapience and claims the role of leader. This brood leader is almost immediately killed by the highest gendered of the local M’kai, so that the new brood will imprint upon them. The state of being and nature of how one comes out of this violent infancy determines that M’kai’s gender and their place in society, with the highest gendered being the best off.

In ages past, the M’kai were virtually demigods, and they have not forgotten this. Their motives are vague and their purpose obscure. They could most likely rule the galaxy if they had any desire to do so, but for decades they have made no major moves, save to accumulate power and influence. It remains to be seen whose side, if any, the M’kai are on.

You are an alien, incapable of thinking or acting like humans do. You are outlandish in attitude and action, speaking in ways that many would consider over-the-top. From birth your entire existence is focused on survival at all costs and knowing your place in society.

When you start creating your M’kai, you must consider where you would like them to stand in the social order. Your rank is determined by what M’kai call gender: while technically there are as many genders among the M’kai as there are M’kai, for practical purposes they have 120. 1-20 are sub-sentient (not playable). 21-50 are Low-Gendered, those who lost significant pieces of themselves during their rise to sentience, and who tend to be simpleminded servants concerned more with following orders (and not getting spaced) than they are with rising up the social ladder. 51 – 80 are Mid-Gendered facilitator drones. Most of this number are skilled workers, fighters, and artisans. 81-115, High-Gendered, are prominent M’kai who came into their sentience relatively intact. These make up the basic command structure of the M’kai. 116-119 are the highest gendered. Players cannot start their M’kai at this level, and it is quite difficult to reach this level as a player character. 120 is the leader of the M’kai Brood. After choosing High, Mid, or Low-Gendered, whoever is assisting you with Character Creation must roll a D20. Your Gender number is counted up from the lowest possible number you could have within your Gender Bracket. This means that if you are playing a Lower Gendered M’kai and roll a 5, you start off at the 25th Gender.

You instinctively follow the orders of those higher gendered than yourself. This does not mean you do not try to surpass them in order to rise in the ranks, rather, you will follow their orders in the moment they are given, when the chain of command is clear. The highest gendered will routinely promote and demote lower-gendered M’kai, sometimes at a whim, though never more than one or two places at a time. While you often seek to better your situation, you do so only incrementally, seeking to rise steadily up the chain. The idea of a sudden rise to power is simply unheard of; and most M’kai rarely move beyond their bracket.

Many view your people as immoral criminals, but this is mainly because your view of morality is quite alien in comparison to their own. Cunning but rarely deceitful, you are more inclined to leave out important pieces of information and massage the truth, rather than commit an outright lie. From birth, you are all about survival of the fittest, and simply have no respect for those who you see as unfit, or those who try to place themselves above their station.

M’kai players are limited to the K’laxxon Brood. See the Costuming Guide (link above) for details regarding visual standards for this Brood.

Names for M’kai of the K’laxxon brood all begin with K’ (K’larr, K’rell, K’leesl). Double-letters are common. It is thought that matching patterns of letters in the names indicate a common Broodyear, but because of the structure of their society, M’kai do not recognize the concept of ‘siblings’.

The M’kai Skill paths are split along gender lines: Low, Mid, and High Gendered. Due to their technological mastery of teleportation, many of their Skills center around the ability to teleport.

Teleportation Specialist – 5 Build – Permanent Special – Any Skill or Cybernetic that allows you to Teleport is considered Periodic if it is Per-Event or is Per-Combat if it is Periodic.

Coagulant – 4 Build – Permanent Special – All Bleed effects on you end automatically after 5 minutes.

Companion – 1 Build – Periodic Special – Allows you to take a Friendly Willing Target with you when you Teleport, or when a friendly Target within Melee Weapon Range uses a Traverse Skill you may copy that Traverse Skill.

Sacri-Port – 4 Build – Periodic Special – Allows you to Teleport a willing Target to a Teleportation pad you designate at the beginning of the Event. You drop to the Critical Stage of your Death Count. Sacri-Port can be used in Conjunction with Respawn.

Mind of Child – 4 Build – Permanent Special – Any Skill that would cause you to become Afraid, Enraged, or Calmed instead causes you to become Panicked. This Skill is always active.

Respawn – 15 Build – Per Event Special – When you reach the end of the Out stage of your Death Count (through natural means), instead of going into Critical, you may choose to activate this Skill. You disappear and go Out of Game for 5 minutes (you must immediately go out of sight from anyone nearby). After 5 minutes are up you return to play with full Body and Stamina. You may also choose to use your Floating Refresh.

Poison Sacs – 2 Build – Periodic Ranged Attack – You may use Spell Packet to deliver a Rank 1 Contact Poison. This Skill is blocked by Shields. This Skill does not work if you are rendered Mute or your Mouth/Tongue is otherwise Destroyed/Obliterated.

M’kai Craft: Poisons (Dirty Tricks) – 2+2 Build – Permanent Crafting Knowledge – Allows you to read, understand, learn and utilize Rank 1 and 2 Poison Plans. When purchasing this Skill you gain a Rank 1 and a Rank 2 Poison Plan of your choice, along with 1 random Rank 1 and Rank 2 Poison Plan. Crafting Skills have an doubling Build cost after every other Purchase (2, 2, 4, 4, 8, 8, etc). The cost of this Skill is 2 Build + wherever it falls along that line. This means that if this is your first Crafting Skill purchase it would cost 5 Build, but if it were your third, it would cost 7 Build.

Command Word M’kai – 4 Build – Periodic Mental Attack – Give a Target a 1 word command. Target must fulfill that Command to the best of their ability. Use of this Skill can be paired with a gesture such as pointing. Unless the Target is another M’kai this Skill cannot be used to cause someone to throw their life away. The effect of this Skill lasts for 1 minute.

Alien Mind – 6 Build – Periodic Defense – Defends against any Mental Attack. You are Immune to that Attack for 1 minute after using this Skill.