The Oniri are a humanoid marsupial species with three divergent sub-species: Loroniri, Sajoniri, and Xanoniri. They are known for their strong dislike of humans and fondness for the arts and sensory experience in general. Appearance is not everything to an Oniri, but it certainly means a great deal.

At a glance Oniri look very similar to humans. All three sub-species share a similar pattern of blue or purple spots that start at the temples and run down the sides of the body to end around the hips. Each sub-species of Oniri has additional traits specific to their kind: The Loroniri have long “elf” ears. The Sajoniri have a third row of spots that runs down the center of their body starting at the bottom of their lips. The Xanoniri have additional spotting around the eyes, and players of Xanoniri are encouraged to wear strangely colored contact lenses to indicate their character’s special, enhanced vision.

Oniri clothing is neat and high-fashion, consisting mostly of solid, well-coordinated colors and accents of contrasting color or patterned materials such as lace and embroidery. Likewise, hair and makeup trend towards traditional styles, often with color specifically matched to clothing. An Oniri would never allow themselves to appear sloppy or unkempt. 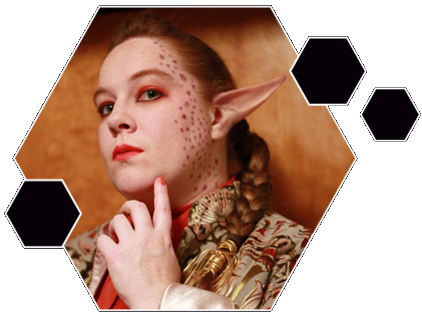 The Oniri have never forgotten that they once ruled the Galaxy.

The history of the Oniri stretches back over 2 million years, making them one of the older civilizations still active in our galaxy. Roughly 1 million years ago they allied with an Entropic entity known as the Scourge, and formed the Void Empire. This Empire fought a long and brutal war against the Gresh Collective for control of the galaxy. The conflict lasted for over 100,000 years, and ended with the defeat of the Void Empire and near extinction of the Gresh Collective. For the next million years, the Oniri made various attempts to rebuild their empire and regain their former glory, but these endeavors were short lived, and the Oniri settled into a long period of decline.

It was during this time that the Oniri became a divided people, forming three separate kingdoms each in a different star system. Gradually, due to environmental differences and limited contact between the kingdoms, the Oniri became three biologically distinct species.

1000 years ago the Oniri united for the first time in nearly 100,000 years. With strong leaders to guide them they began again their conquest of the galaxy. The new Oniri Empire spread rapidly, but soon encountered an up-and-coming species who had just stepped onto the galactic stage: Humans. Looking to squash the humans and their small-but-rapidly-expanding empire, the Oniri brought the full force of their armada to bear against the Celestial Ascendancy.

The unified Oniri had a clear advantage both numerically and technologically, but the Celestial Ascendancy saw weakness in their enemy’s fragile union, and set about turning the kingdoms against each other. Soon, a civil war broke out, distracting the Oniri and forcing them to withdraw their forces. By the time the civil war was finally drawing to a close, the Celestial Ascendancy had built a new fleet, which swept in and easily defeated their weakened foes.

For 500 years, the Oniri homeworlds lived under harsh Ascendancy rule. The Ascendancy destroyed millions of years of Oniri culture during their occupation, and made an example of them to the rest of the galaxy. After The Fall of the Ascendancy, growing resistance amongst the Oniri turned into a full rebellion against their human oppressors. For 200 years the Oniri fought, and eventually won their freedom.

Today the Oniri are a people united once more. There is strong movement to revive Oniri culture, and the ever-present longing to return to the days of the Void Empire, and punish humanity for what they have done.

Oniri are sensationalists. Life is art to you, and you have a consuming desire to appreciate it in all of its aspects. In addition to your strong focus on sensory experience, you have a particular affinity for a specific aspect of life, based on your sub-species type. You dislike over-stimulation in general, even though you have developed skills to tune out bothersome input. You prefer to be able to ‘turn on’ your awareness specifically for the experiences you choose to enjoy.

Having lived through a long and hard-fought war against human occupation, you have a strong and justified distrust of other species, especially humans. However, you recognize the need for diplomatic relations, and do your best to be civil. Oniri are monarchists, having a strange and byzantine system of government, and your worldview is heavily influenced by this. There is a saying that the when an Oniri sees a knot, she does not seek to untie it, instead, she tries to find a way to make the knot so complex that it can never be untied.

Each type of Oniri represents a different kingdom. These sub-species are genetically distinct from each other, and should be considered biologically incompatible. Loroniri, the Kingdom of Listeners and Tale-spinners: Focused on music and sound, with incredible sense of hearing and perfect pitch. Sajoniri, the Kingdom of Sensation: Focused on touch and taste, trained Sajoniri can touch an object and know its history through vibrations. Xanoniri, the Kingdom of the Piercing Eye: Focused on sight, their eyes are so powerful they can see between the spaces in our reality.

Oniri treat all Surprise Attacks as regular (non-Surprise) Attacks and may Defend against them accordingly.

Freedom Fighter – 10 Build – Permanent Special – You do +1 Damage against all Human Targets.

Contraband – 4 Build – Per-Event Special – At any point during the Event you may declare a single item. So long as you are able to physically hide this item on your person, it cannot be found via a casual search. This Skill provides you with the reasonable benefit of the doubt should the item become briefly visible, such as a shotgun you have tucked away in your trench coat becoming partially visible as you move down a hallway. You can pull an object in and out of Contraband at will, this does not constitute a separate use of this Skill. Additional purchases of this Skill allow you to declare additional items. The items must be singular, and cannot be used to contain other items.

Beguile – 5 Build – Permanent Special – Perform (dancing, singing, storytelling, etc) before a Target wearing the Negotiate Symbol for 2 minutes. You may then make one request of the Target. If the request is within the Target’s nature, they will agree to your request (for example, it is unlikely that a Target will turn around and start attacking his own men at your request, but he may be willing to tell him men to stop so you can negotiate). A Target may not be effected by this Skill more than Once Per Event.

Shout – 10 Build – Permanent Special – When using any Voice Skill (including Rhetorics), you may select 1 additional Target.

Hear No Evil, Speak No Evil – 4 Build – Permanent Special – You may use your “Change Spots” Skill to Defend against any Attack that would render you Deaf or Mute.

Fly On the Wall – 4 Build – Per-Event Special – Spend 1 Minute Concentrating. You can enter any Area or Room and stay there for up to 10 minutes, no matter what impediment may stand in your way. During this period of time you are considered to be Out of Game, and cannot interact with anything in that room, nor use any Skills. You may however use any Tech Item you have available to record anything going on in that Area/Room. When this Skill ends you immediately appear in the same spot in which you enacted the Skill. This Skill may not used while you are actively engaged in Combat. Once this Skill has been activated it may not be used again for 1 hour.

Psychometry – 5 Build – Permanent Special – Purchasing this Skill counts as a purchase of the Skill “Investigate X” (see the Universal Skills list) with Psychometry replacing the Keyword Specialty. Spend X amount of time specified by a Plot Marshal examining a Dead Target or an Object. For a Dead Target you gain general information regarding the last 5 minutes of the Target’s life. For an object you gain general information regarding the environment in which the object was created. Requires a Plot Marshal Requires Marshal.

Perfect Taste – 2 Build – Periodic Special – Allows you to determine if an object is Poisoned. Once this Skill is used, you may freely consume the object without being Poisoned. This secondary effect lasts for 1 hour.

Circumlocution – 6 Build – Permanent Special – Your “Change Spots” Skill now also allows you to choose which Limb or Sense is Destroyed or Obliterated when a Limb or Sense is the Target of a Skill that would Destroy or Obliterate it. You may not choose a Limb or Sense that is already Destroyed/Obliterated as the Target of “Change Spots”. This cannot be used against Skills that affect multiple Limbs or Senses and cannot be used to change an Attack against a Limb into an Attack against a Sense.

Phase Sight – 5 Build – Permanent Special – Allows you to see and interact with things that are out of tune with our dimension.

All Seeing – 10 Build – Permanent Special – This Skill Grants you the Skill “Investigate X” with all 3 Keyword Specialties. When utilizing “Investigate X” it may only be used Once Per Period.

Second Sight – 4 Build – Permanent Special – You may use your “Change Spots” Skill to Defend against any Attack that would render you Blind.

Mesmerize – 6 Build – Periodic Mental Attack – After spending 1 minute Talking to a Target and maintaining eye contact with them, you may use this Skill to force the Target to carry out a simple task. This task must explained in one non-compound sentence, and may not be violent in nature. The Target remains affected by this Skill for 5 minutes. Once this Skill has ended, the Target has no memory of what they did while under the effect of this Skill or of a Skill being used upon them.