The Cryo are a species forever preoccupied with their own mortality. In order to lengthen their naturally short lifespans, the Cryo gave over control of their lives to mechanical suits, which maintain in all environments the cold temperatures needed for the Cryo to survive.

The Cryo appear to be partially frozen, having light blue skin dappled with frost. Most Cryo seem gaunt, with sharp facial features and sunken eyes and cheeks, despite being in good health. Older Cryo tend to have darker mottling of the skin near the edges of their faces.

Cryo dress almost exclusively in close-fitting black and dark grey clothing, covering as much of their exposed skin as possible. In foreign environments, some will wear layers of protective coverings for additional safety. All Cryo must wear a representation of their containment suit, at minimum this should be indicated by a blue light-up collar, but players are encouraged to build a more unique and interesting life support apparatus. 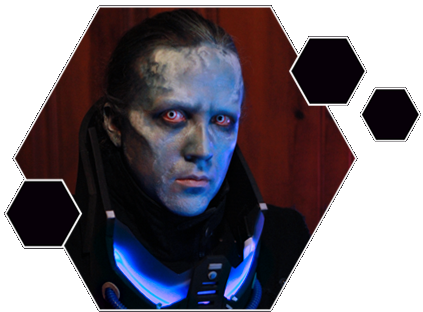 The pursuit of longer life has always played a prominent role in the history of the Cryo. Their ancestors were fragile, leading brief, cautious lives. Gradually they found ways to lengthen their lifespans, and, with the increase in available time, began a period of rapid cultural and scientific development and discovery. A little over half a million years ago, it would appear the species had reached its technological and cultural peak.

At this time, they possessed spacecraft capable of limited interstellar travel, and had begun voyaging to nearby star systems. What they found was discouraging, these systems were barren, uninhabitable for the still-delicate Cryo, and possessed little in the way of useful resources. Their travel never brought them in contact with other intelligent species, and they came to believe they were alone in the galaxy (despite the odds of that being quite low). Interest in exploring the vast void of space waned, and the practical-minded species turned its focus back to affairs at home requiring more immediate attention.

Their planet, Cryxis, was largely aquatic, with a limited landmass and small equatorial zone of habitation. It was not long before the growing population saw their natural resources running low. With limited viable options, they were forced to begin a risky terraforming project which would unfortunately have dire consequences for their entire planet. What followed were years of devastating earthquakes and volcanic eruptions which threw enough ash into the atmosphere to block out the sun for decades, ushering in an ice age.

In the wake of this disaster, the Cryo set themselves to the task of survival. They altered themselves biologically and mechanically in order to survive in the colder temperatures. This was intended to be a temporary adjustment, but they soon realized that by becoming fully dependent upon this new technology they could increase their lifespans by several hundred years. They chose to make these changes permanent, and when the dust settled and the ice began to recede, the Cryo were no longer the species they had been before.

The Cryo remained entirely unaware of galactic affairs until a M’kai expedition discovered them approximately 300 years ago. This chance meeting opened up the galaxy for the Cryo, and they again began journeying to the stars, their adaptations making exploration much less daunting than it had been. Many would go on to join the Consortium in hopes of using their vast knowledge to improve the life-extending technology.

The technologically adept Cryo quickly made an impact on the galaxy. After the Fall, when communication with Ascendancy groups was cut off for a time, the Cryo found a place for themselves as couriers and information brokers, passively helping to knit the broken galaxy back together. This granted the Cryo immense power and wealth, which (perhaps due to their cautious nature) they prefer to use from the shadows.

Having experienced an apocalypse which seemed as though it were the end of all things, the Cryo are all too aware of the peril our galaxy faces, and will do their best to benefit from it.

On the surface, you appear standoffish, cold and analytical. Your own safety in any given situation is paramount to you, so it often takes some time before you will let your guard down around new acquaintances. With those you have come to trust you are more friendly, but you still generally maintain a certain distance from others due to the strong cultural prohibition against physical contact with all but your closest friends. You avoid conflict wherever possible, and if involvement in some altercation is required, you prefer support and analysis roles to those of active combatants who might face injury or death on the battlefield.

You are well known for your analytical skills, but your preoccupation with information and a careful, thorough decision-making process can often lead you to moments of “analysis paralysis”. Any problem you encounter can be investigated at length and in further depth, but time often does not permit you this enjoyment.

Biologically, you are not considered a purely organic species. The genetic manipulations your kind has undergone are so extensive that new Cryo cannot be raised outside of specially designed nursery-schools. In addition, the cybernetic alterations which maintain and monitor your vitals have made it so your species cannot survive without the aid of their containment suits.

Cryo skills are based around self-preservation, with each path taking a specific approach to accomplishing that. Shell is focused on survival through defense and avoidance. Countermeasure is focused on responding to threats quickly and efficiently. Analyst is focused on use of scientific analysis to determine the best outcomes.

Cryo start the game with the “Life Support Core” Cybernetic for no Tether Cost. This Core does not count as your first Cybernetic Core for the purposes of escalating Tether Cost.

Suckle – 3 Build – Periodic Special – When a Target within Melee Range of you utilizes a Skill, or is the Target of a Skill, you may call “Suckle” to duplicate that Skill on yourself. This only applies to Skills whose effect is instantaneous, and whose conditions you are able to meet. So, you could not Suckle “Hide” unless you were already within Cover. Likewise you could not Suckle “Defensive Stance” unless you had a Shield. You cannot Suckle any Skill that is offensive in nature. You cannot Suckle a Suckle.

Fear Response – 4 Build – Periodic Defense – Defends against any Mental Attack. You are Afraid of the one who Targeted you.

Icy Exterior – 8 Build – Permanent Special – You have a Soak of +1 against all Attacks. You now take Double Damage from Fire Damage and half Damage rounded in favor of the Attacker from Frost Damage. Soaks cannot reduce Damage to Less than 1.

Frost Armor – 8 Build – Permanent Special – You have 10 Armor Points (AP). This Armor is restored whenever you would restore your Stamina while outside of Combat.

Respawn – 15 Build – Per Event Special – When you would go from the Out to Critical Stage of your Death Count, you may activate this Skill. You become Shifted for 5 Minutes. After 5 Minutes you return with full Body and Stamina. You may also choose to utilize your Floating Refresh.

Courage at a Distance – 8 Build – Permanent Special – You do +1 Damage with all Ranged and Thrown Weapons, but are unable to wield any Melee Weapons. You may still use a Shield.

Death Blossom – 8 Build – Periodic Special – For 1 minute you do +5 Damage with all Ranged Attacks. The duration of this Skill immediately comes to an end if you are hit by an Attack. Whenever this Skill comes to an end you are Dazed for 1 Minute. This Daze cannot be Treated.

Cultural Examination – 2 Build – Per-Event Special – After utilizing the Skill “Research X” (see the Universal Skills list) in conjunction with any topic pertaining to a Faction, you may utilizing this Skill to gain +1 Influence to be used on Schemes concerning that Faction. Influence gained this way is lost at the end of the Event.

Cold Comfort – 6 Build – Permanent Treatment – Spend 15 Minutes Treating a Target with a Lesser Flaw, or Lesser Trauma. Lesser Flaw, or Lesser Trauma is healed. Target has 2 Less Body and 2 Less Stamina for the remainder of the Event and can never shake the cold feeling your Treatment has left them with. Target may only benefit from this Skill Once Per Event. Roleplay for Treating Flaws and Traumas with this Skill should be roughly equivalent.

Metabolic Arrest – 3 Build – Per-Event Treatment – Requires 1 Minute of Roleplay. Target someone suffering from a Disease. If the Disease has Stages, the next time the trigger for the next stage of the Disease would happen, this Skill defends against that the Trigger. This Skill may also be used on a Target within 1 minute of a Disease Stage Trigger being activated in order to return the Disease to its previous stage.